(chinatrucks.com, Jan.20, 2010)Nissan's light-truck sales in 2009 (including Infiniti) were down 28.5 percent versus 2008, but the Japanese automaker expects more market penetration in 2010. Brian Carolin, Nissan's senior vice president of sales and marketing, says his optimism is buoyed by a strong sales finish in December 2009 and the impending arrival of new light-truck products. 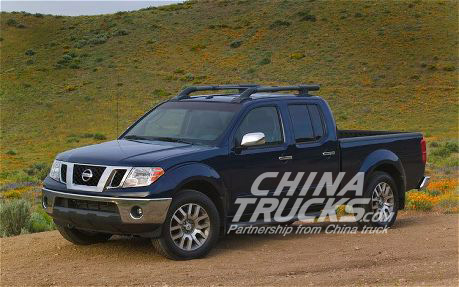 According to Carolin, the December 2009 sales of two key truck models came as a surprise. The mid-sized Frontier sold 2988 units, more than double its December 2008 total, while the Pathfinder enjoyed a 49.2-percent increase with 2314 units sold. The Armada, Titan, Xterra, and entire Infiniti SUV line also made gains in the final month.

"One of the pleasing things, and this was true particularly toward the back end of the year, we were seeing penetration levels on some of our volume trucks picking up significantly," Carolin says. "We ended the year with Frontier (doubling) the market share of the prior year (in December). And we were doing that without paying incentives at the prevailing average in the segment."