www.chinatrucks.com: Caterpillar is again facing legal action as a result of the ACERT engine technology it used to meet EPA’s 2007 emissions regulations.

According to a website for business lawyers, law360.com, a proposed class action suit filed last week in New Jersey federal court alleges Caterpillar sold defective engine systems that constantly failed and did not last as long as Caterpillar said they would.

BK Trucking Co. alleges that Caterpillar has known for years that its Caterpillar C13 and C15 Advanced Combustion Emission Reduction Technology diesel engines were defective, yet concealed the problems while still touting the engines’ high quality and reliability. 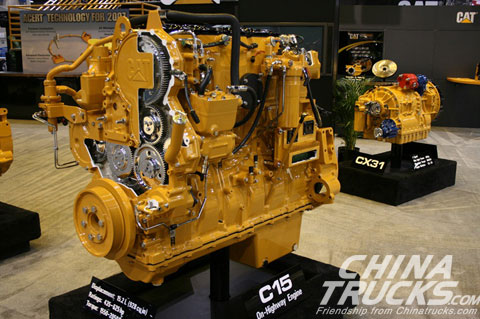 Caterpillar advertised its C15 engine with ACERT technology for 2007 at an industry trade show.

“This action arises from defendant’s failure, despite longstanding knowledge, to disclose to plaintiff and other consumers that the emissions and regeneration systems of the engines are defective and predisposed to constant failure,” the complaint says. “Caterpillar actively concealed the defect and that the existence of the defect would diminish the intrinsic and resale value of the vehicles.”

BK Trucking said it bought 10 new trucks with the C13 or C15 engines between 2007 and 2010 and that they break down every seven or eight weeks. Emissions and regeneration systems were cited as the main culprits. The problems include repeated instances of check-engine lights, engine de-rating, and diesel particulate filters clogging due to faulty regens, with soot buildup that causes requent engine shutdowns, the suit alleges.

The suit alleges Caterpillar provides only temporary repairs or replaces it with another equally defective and failure-prone system.

A spokesman for Caterpillar told Law360.com that the company does not discuss pending litigation.

It’s not the first legal challenge Caterpillar has faced over its ACERT technology. In 2010, we reported on a similar lawsuit in Texas, which chronicles problems with Caterpillar C15 Acert engines produced with exhaust emissions equipment designed to meet federal limits imposed in January 2007. That suit involved 90 Cat-powered trucks run by three fleets.