www.chinatrucks.com: Light trucks play a pivotal role in the Chinese medium- and short-distance logistic service market. Along with the constant expansion of the market, The Chinese light truck sales has been exceeded one million units during recent years. With such a large presence of light trucks, you may readily recognize JMC in your neighborhood. However, you may not know a number of Guinness records that JMC light trucks have held so far. 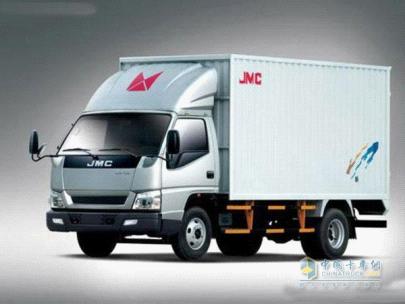 Mr. Qu is from Cangzhou in Hebei. His JMC light truck has accompanied him for 18 years and has witnessed all the ups and downs of his business. Like an obedient servant seldom makes any complaint, JMC light truck delivers highly reliable performance with outstanding fuel economy.

JMC light truck in operation for 1.8 million km in 15 years

Mr. Xiao is from Dongying, Shandong. He has driven his JMC light truck for 15 years with a total distance of 1.8 million km, which is the equivalent of revolving around the equator of the earth for 45 times. Mr. Xiao has driven his truck across most parts of China and his truck has also witnessed and contributed to some of the biggest highlights of his life, such as getting married, buying a house, and becoming a father who supports the family with the help of his JMC.

Mr. Yang is from Liuyang, Hunan. On average, He drove his vehicle for 20,000 km per month. Mr. Yang with his JMC light truck has traveled most parts in Southeast China. JMC light truck has also brought great fortunes to Mr. Yang's family thanks to his diligence.

JMC light truck drives 770,000 km with its engine free of any big trouble
Wuxi Yongchuang Electric Control Parts Co., Ltd. has a JMC light truck. Since its arrival in the company, the truck has covered a distance of 770,000 km. Still, the engine of truck, made by Isuzu, has never suffered any big problems.

Light trucks, may seem lifeless and unemotional to many people. However, to truck drivers, they are never just a pile of iron, but a life partner. JMC light trucks are always ready to serve its master on their road to prosperity. Working diligently, they never make a complaint. Pleasantly, they serve their masters with great music and radio programs while driving on the road.