CAMC Boosts in October with Year-on-Year Growth of 144.90%

www.chinatrucks.com: The sales of CAMC reached 1560 units, compared to the last October of 637 units, up by 144.90% year on year. And the growth ranked No.1 in the industry. Why did CAMC have such a great growth in October? One reason lies in products competitiveness, and the other one lies in the marketing competitiveness. 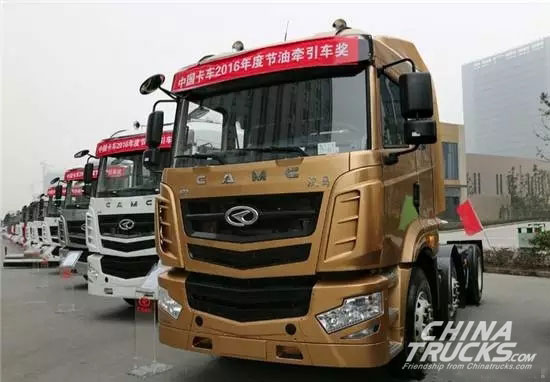 Products competitiveness: Acceptance of self-produced components
After many enterprises gave up the road to produce engines by themselves, CAMC always adhere to the independent development of the core components of the engine. And in 2016, CAMC finally had good harvest after a series of difficulties and hardships.

Especially the Hanma power (produced by CAMC) introduces the braking technology in the cylinder, the driver need not brake frequently, saving more physical effort. And less brake means the truck will not like other vehicles with water spraying device, and save a lot of brake disc replacement costs. As well when you brake, engine does not require fuel injection, economic efficiency is relatively high. The reliable and safe driving won many customers heart.

Also, not only Hanma power (produced by CAMC) has high attractiveness in domestic area, but also the CAMC trucks have a stable position in the market with their good performance and safety.

In brand marketing, CAMC continued to improve the product quality. The product most uses CAMC self-developed Hanma power, Hanma gearbox and other products such as CAMC axle. Therefore, the sales in the second half year have increased significantly.

In brand promotion, CAMC is also focused on the promotion for the needs of different users. For example, Qingdao hazardous chemicals market is relatively hot, CAMC made brand promotion to such users and won their favors. As a result, the sales are getting better every year. It is understood that CAMC not only reached nearly 30% in the Qingdao market, but also is increasing year by year at a speed of 30%, and the dangerous goods vehicle sales ranked in the top 5 of the heavy truck brands.

The sales of 1560 trucks looks insignificant compared with some big enterprises, but the high growth let the industry see the hope of independent research and development engine.