FAW Jiefang Awarded the Most Valuable Commercial Vehicle Brand in 2016

www.chinatrucks.com: On December 3, with the theme of “productivity liberation”, WeMedia2016 (China WeMedia Annual Conference) was open in SHANGRI-LA Hotel in Beijing. The conference has named the 2016 Mobile Enterprises List, who have foreseen the future of the market development and grabbed the opportunity, and fulfilled the theme. 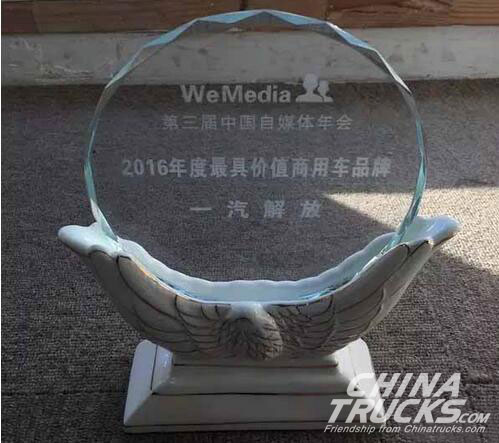 As a benchmark for China's commercial vehicle development, FAW Jiefang has been focused on by the industry. In the complex and various market environment, FAW has always held the leading core technology tight and had insight into the trend of the market development, that accomplished its amazing creativity. FAW 60-year manufacturing experience has stayed in the leading position since it started during the long-distance running of national automotive industry booming.

FAW Jiefang sales climbed higher in 2016, and ranked No.1 on the heavy trucks sales ranking for eleven consecutive months. No matter the sales champion or the greatest honor of “the most valuable commercial vehicle brand in 2016”, FAW can not do it without the trust and support from the customers.

The FAW official Weichat was proud that FAW Jiefang was awarded the most valuable commercial vehicle brand in 2016. FAW Jiefang has always adhered to manufacturing trucks in high standard, created the most thoughtful and the highest efficiency money machine for customers to achieve their wealth.