An Overview on LNG Trucks in Two Sessions

www.chinatrucks.com: The two sessions is getting underway in which Premier Li Keqiang has referred to the word “new energy vehicle” for many times and encouraged manufacturers to produce new energy vehicles. So it comes to the question, what’s new energy vehicle? It is simply understood that they are powered by natural gas, methanol, hydrogen and other clean energy. From technology perspective, natural gas vehicles are now well-developed compared to the methanol and hydrogen ones, and also there are some natural gas products for sale in the market. 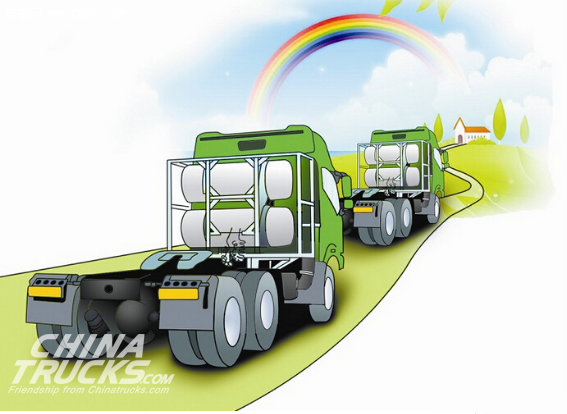 The natural gas vehicles are mainly classified as LNG and CNG, they are all natural gas fuel but different in the way the gas was stored, LNG is natural gas that has been converted to liquid form for ease of storage while CNG is in gaseous form. The liquefaction natural gas can save storage space and cost, also has the characteristics of large calorific value and high performance, therefore in the future LNG vehicles will become the mainstream new energy vehicles on the market.
Actually, some manufacturers began targeting at LNG market years ago, and has delivered strong sales performance in the market, such as SHACMAN, DAYUN, SINOTRUK, FAW Jiefang and so on.
As early as 2005, SHACMAN developed China’s first CNG heavy-duty truck at international advanced level, Aolong 6x4 CNG tractor. One year later, SHACMAN became the first commercial LNG heavy truck manufacturer in China heavy duty industry after solving key technical problems. At present SHACMAN LNG series including tractors and cargoes all sold well, taking over 45% of the market shares. The government intends to develop new energy vehicles in this time, as the leader in natural gas vehicles market SHACMAN will have better opportunities to develop.
Delong X3000 LNG tractor is among the representative products of SHACMAN LNG vehicles, with two options of 400hp and 460hp available and 6*4 driving type, and the transmission is introduced FAST 12 gears or 16 gears, when the gas cylinder with a capacity of 900 liters, the speed can reach 120KM/h, which is as good as the diesel version. 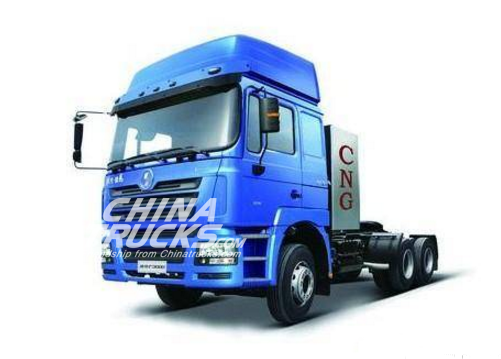 As one of few top auto manufacturers in producing LNG vehicle, FAW Qingdao has embarked on developing LNG vehicle since 2006. The CNG and LNG series products developed by FAW can address the needs of customers at different levels. Popular LNG models include Tian V and JH6, which had been chosen as the specified vehicle for Qingdao Shopping Basket Program in 2004 to reduce greenhouse gas emissions in the city.
As an outstanding LNG vehicle produced by FAW Qingdao, Tian V LNG vehicle is equipped with a Weichai WP12, offering a horsepower of 400hp and a power of 294kw. A FAST 12 gears transmission with a maximum speed of 102km/h and a gas cylinder with a capacity of 750l are also fitted.
The LNG vehicles produced by Sinotruck are also beloved by customer. In 2015, LNG vehicles had ever been greatly affected by the lowing diesel price but the year of 2017 marks a beginning of a booming recovery. It is reported that Sinotruck had received an order of 160 LNG vehicles from its customers in February this year. SINOTRUK ever developed the earliest heavy-duty natural gas truck engine in China, and now it remains the leading heavy-duty LNG truck engine builder with great potential for development by keeping update its MAN technology platform.
The 160 units of LNG vehicles ordered by customers in February are precisely HOWO 8×4 dumpers. When being viewed from the configuration, the dumpers are equipped with a HOWO 76 driving cab, T12-380hp LNG engine and HW19710 transmission, as well as HR 9 tons front axle and HC16 rear axle, which can fully meet the requirement of city construction trucks.
Dayun LNG Heavy-duty trucks also have seen massive growth and success these years. The Dayun group precisely locates in Shanxi province where boasts the largest coal mining area with ever-increased demand for coal transportation. Shanxi provincial government took the lead in promoting “New Energy Vehicle” in China. In 2015, Shanxi province issued the Interim Management Measures of the Subsides for New Energy Vehicles, aimed at offering subsidies for automakers which also contributed to the rapid development of DAYUN.
A highly recommended LNG product of DAYUN must be its N8 series tractors which has two driving type options of 6×2 and 6×4. Besides that, N8 LNG tractors are equipped with WP10 engine with 350hp, FAST12 transmission and gas cylinder with a capacity of 900 liters.
Premier Li attached great importance to new energy vehicle by referring it many times on the two sessions. Whether the LNG heavy-duty truck takes this opportunity to develop, it will be finally tested and verified in the market practice. The above mentioned enterprises are at the top in China with their advanced technology, excellent performance, complete parts supply and service network. With the full implementation of national V, the introduction of new energy vehicle and the imminent national VI, more and more LNG vehicles makers will be booming after setting itself at the right position.