www.chinatrucks.com: The newest heavy-duty truck set to operate at the Port of Los Angeles emits an unusual byproduct that California could certainly use more of: water. 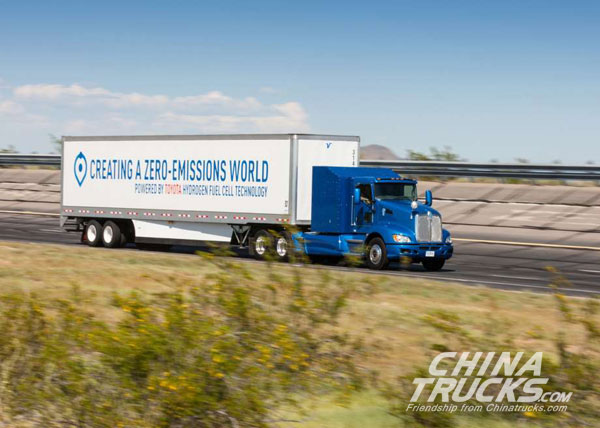 Toyota's hydrogen fuel-cell truck, which will emit nothing but vapor, will begin a feasibility study at the port this summer. The Japanese automaker unveiled the concept Wednesday and will start testing it in short-distance fleets that run back and forth between the city's docks and nearby warehouses operated by retailing giants.
Swapping internal-combustion engines for fuel-cell stacks will support Gov. Jerry Brown's efforts to cut emissions from freight movement in California. The ports of Long Beach, Los Angeles and Oakland handle 40 percent of U.S. container traffic, with commercial shipments generating half of California's toxic diesel-soot emissions and 45 percent of the nitrogen oxide that plagues L.A. with the nation's worst smog.
"We think this is a really important step to demonstrate the capability of fuel cell," Bob Carter, the president of Toyota's U.S. sales unit, said in an interview with Bloomberg Television. Toyota developed the powertrain for the semi truck, which was built by Paccar Inc., he said.
The Class 8 truck prototype is the latest indication Toyota intends to maintain a leading position in the nascent fuel-cell vehicle market. The carmaker put its Mirai fuel-cell sedan on display Tuesday in China ahead of the Shanghai auto show as it jostles with the likes of Hyundai and Honda in the race to dominate the sector seen as a possible new frontier in greener transportation.
Related China Trucks News
Do You Want Any Help?