Daimler, Volvo Using India as an Export Hub for Its Trucks and Buses

www.chinatrucks.com: Daimler AG and Volvo AB are likely to feature among the biggest success stories of the Make-in-India drive, with the two marquee names in the global heavy-duty transport industry using the South Asian nation as their export hub for large trucks and luxury buses.

Mercedes-Benz, Mitsubishi Fuso, Freightliner and UD Trucks are being made locally for overseas buyers, helping establish the country's automotive-manufacturing credentials beyond compact cars or two-wheelers that have traditionally been exported to emerging economies, and markets in India's immediate neighbourhood. 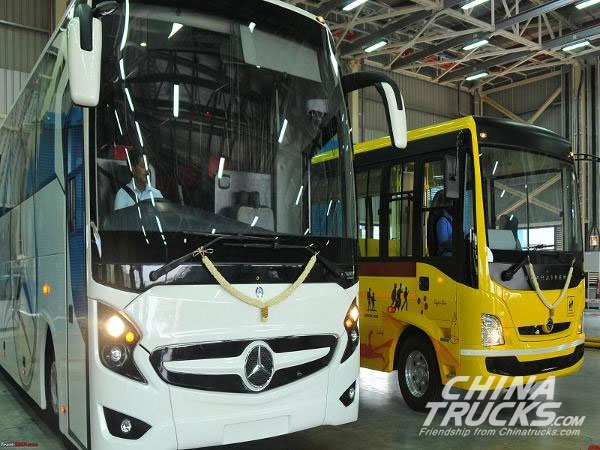 Daimler India Commercial Vehicles (DICV), the Indian subsidiary of the world's largest heavy-duty truck maker, has already begun exporting Mercedes-Benz-badged trucks and buses, made at its suburban Chennai (Oragadam) facility, to Southeast Asian markets.
DICV exports the India-made Mitsubishi Fuso range of trucks to 28 countries: In the second half of 2017, it will begin sales to Mexico of the Freightliner-branded giant trucks, people aware of DICV's plans said.
India's exports of medium and heavy-duty trucks rose 25% in FY17 to 43,719 units, helping manufacturers offset the revenue impact of tepid sales growth at home.
For overseas companies such as Mercedes-Benz and Volvo, higher export volumes help absorb fixed costs associated with their Indian investments. Erich Nesselhauf, MD of DICV, told ET that exports have emerged as an important strategy dimension in the company's business model for the country.
"DICV has been awarded significant responsibilities within Daimlers' global truck and bus businesses. With the launch of a third product line for exports in 2017 at DICV, we will enter the next stage in the strategic collaboration of DICV and Mitsubishi Fuso Trucks & Buses Corporation, under Daimler Trucks Asia," said Nesselhauf.
Similarly, Volvo AB will likely begin later this year overseas sales of the lightduty UD Trucks, which are manufactured at its Indian joint-venture plant at PithampurBSE -4.85 % in Madhya Pradesh. The trucks, meant for the Indonesian market, are now under trial and shipments will begin in the second half of 2017, according to people aware of the development.
In 2016, DICV's truck exports more than doubled to 4,300 units, taking the number of cumulative shipments from India to 7,500 units. Daimler exports to the Middle East, Africa, Latin America, and Southeast Asia. This year, DICV will add 10 new truck-export markets. In addition, the production of a third truck will start locally: The new truck, weighing less than 9 tonnes, will initially be designated only for exports as a variant of the Fuso brand.
DICV also sells bus frames to 10 markets, and the fullybuilt Mercedes-Benz school bus to the Middle East. This year, DICV will add 10 new markets where the company intends to export its new, 16-tonne bus chassis.
Nesselhauf declined to discuss export targets, but added that the revenue stream has significant importance for Daimler's Indian subsidiary. "Export volumes will continue to account for a significant share of our production volumes. While we don't disclose production figures, our 2016 sales of 13,100 (domestic) and 4,300 (exports) units would give an idea of the distribution between domestic sales and exports."
GOOD REVIEWS
Trucks and buses made in India have got good reviews from overseas buyers. India is already the manufacturing centre for the 5-8 litre, medium-duty Euro VI engines for Volvo's home base in Europe. Volvo Buses also intends to use the base in Bengaluru to export vehicles to western Europe in future.
Separately, Vinod Aggarwal, MD of VE Commercial Vehicles (VECV), said: "The export of medium-duty engines from Pithampur to Europe ensures better utilisation of our plant capacity. VECV is focusing on building its exports, which increased 20% in FY17. We expect it to sustain momentum in the coming year." VECV is Volvo's jointventure investment in India.
Homegrown truck makers Tata Motors and Ashok Leyland are also building a modern truck range to ensure that they have a competitive presence in the export markets.