Mercedes-Benz Sets to Shine at the Brisbane Truck Show

www.chinatrucks.com: Mercedes-Benz is launching an all-new on-highway rigid range at the Brisbane Truck Show as well as presenting its newly-introduced prime mover models.

The company launched its new-generation Actros family of trucks in October last year and is now ready to launch the rigid versions, which bring with them the same suite of benefits customers of the new prime mover have been enjoying. 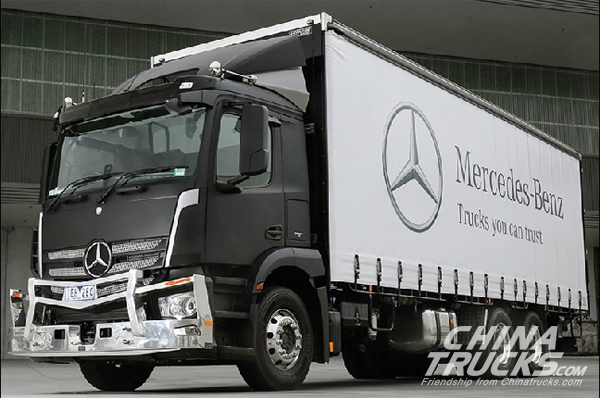 The new rigid model was part of a comprehensive local testing program that has now included more than 35 customers, 20 trucks and more than 1.8 million km.

All the details will be revealed at the show, but Mercedes has confirmed the line-up will include a mix of versatile 4x2, 6x2, 6x4 and 8x4 models.

Standard engine options include 8-litre and 11-litre units, with up to 350hp and 460hp respectively, while larger engines are available for individuals builds.

Flooring specialist GMK Logistics has been surprised by the fuel savings it is realising after adding a new-generation Mercedes-Benz Actros to its fleet. 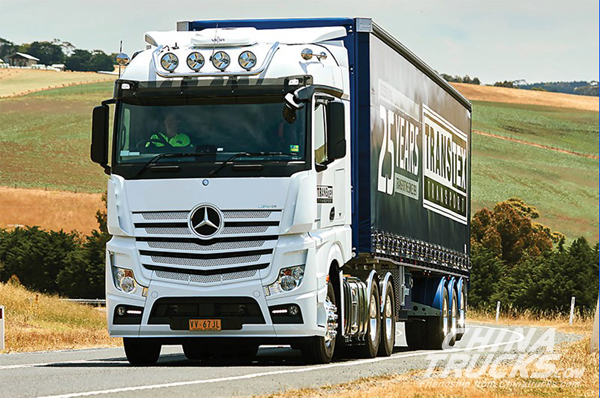 Part of the large Perth-based CTI Logistics family, GMK Logistics has been delivering flooring solutions to its customers since 1962.

It’s based in Sydney and has depots in Brisbane, Newcastle, Melbourne, Adelaide and Perth and runs express and line-haul services between all capital cities.

GMK uses subcontractors for its interstate work but also runs its own fleet of 53 small and medium trucks, as well as one prime mover for local duties, which was replaced with a new Mercedes-Benz Actros.

After a few weeks on the road, the numbers show it was the right decision.

"The fuel economy figures they are getting represent a 25 per cent improvement in fuel economy over the old truck," says CTI Logistics commercial manager Glenn Brown.

CTI Logistics has a fleet of 630 vehicles (including 230 company owned and 400 provided by sub-contractors), which range from small package delivery trucks to road train haulers, but the company has not had a Mercedes-Benz truck before. 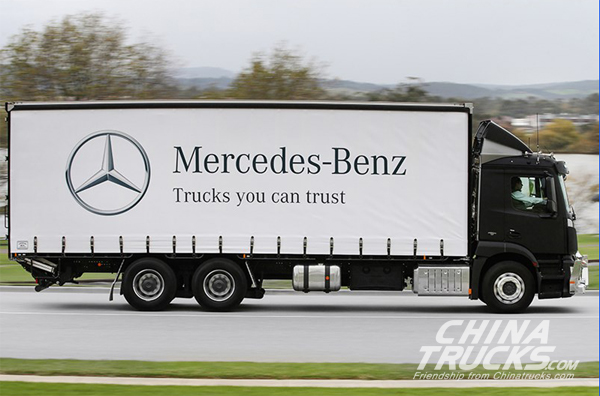 Brown says he decided to take a closer look at the Mercedes-Benz due to positive "industry talk" about the new product.

"We are very happy with our decision to go with the Mercedes-Benz," he says.

Transtex is another happy Actros customer and its MD Shane Blakeborough has taken delivery of four prime movers, with plans for more.

Initially hesitant to drive a Mercedes-Benz truck due to a preference for American metal, Blakeborough is now a convert, describing the model as a "game changer".

"I told them there was no way I was going to buy a Mercedes-Benz truck," he says.

But the results of the trial soon changed his mind and those of his drivers.

First up, it was the economy that made him think again.

"With the savings we saw, it was a no brainer," Shane says.

"The fuel economy figures are incredible. We are running a 38 to 40-tonne 45ft single trailer from Geelong to Adelaide and it is getting 3.28km per litre. It’s off the dial," he adds. 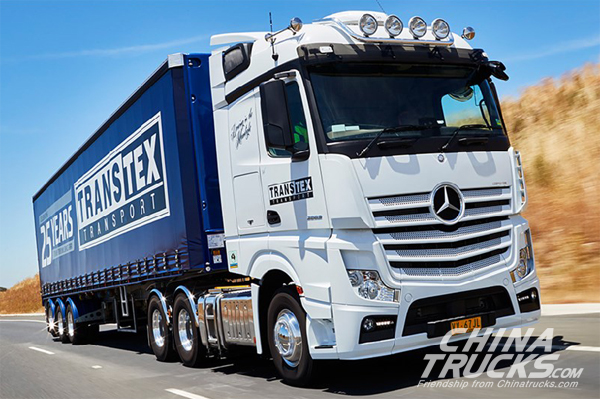 Blakeborough says of the new-generation Mercedes-Benz Actros: "It does everything you need a truck to do; it is extremely efficient, has the performance, it is refined and is very comfortable."

"It made our other new (cabover) truck feel like it was 10 years old."

The drivers selected to test the Actros were also won-over.

"After a few days, we had drivers coming in and saying they’d like to drive it if I bought one," Shane says.

"The driver acceptance has been amazing."

Shane is also impressed by the Mercedes-Benz when it comes to maintenance, with his new Benz trucks likely to require oil changes at intervals of around 70,000km (although they may be able to run for longer depending on the operating conditions).

He points out that this is nearly double the distance a key rival engine in many of his trucks can go before they require an oil change.

"It’s not just the cost of that extra service that I am saving," Shane says. "There is also a load I can take that I would have missed out on when the truck was being serviced."