www.chinatrucks.com: Renewable energy technology company BYD has announced the latest development of its “Fully Sustainable Power Solutions”, a renewable energy business model for advancing its energy storage system, as the company pointed to its success in combining it with photovoltaics. 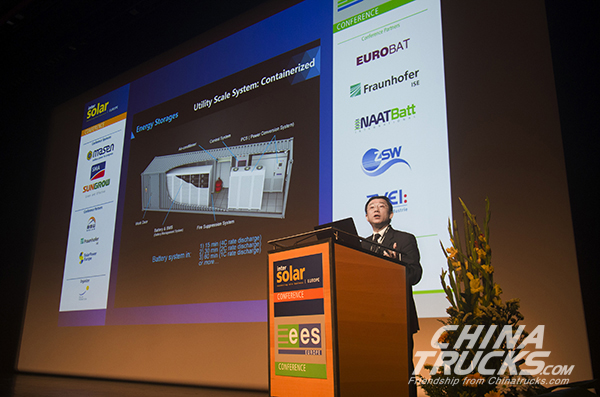 A case study highlighting frequency regulation, one of the benefits of the “Fully Sustainable Power Solutions”, was presented at Intersolar Europe 2017, the solar industry’s biggest trade show. The public showcase comes a year after this business model was unveiled at the same event. The contract for a 60MWh UK project was also signed then.

Results from the 60MWh UK project a year on show that BYD’s energy storage system has operated smoothly over these 12 months. The system responds quickly to the grid’s demand, matching over 99% of aggregate demand with five to six cycles every day. This frequency regulation project is the biggest of its kind in the UK to date.

Tom Zhao, Managing Director of BYD Solar Division said the success of the project is proof that the revolutionary business model works. “We want to pave the way for more projects to follow suit so that the new energy market becomes bigger and better,” he said. “There is a potential demand of 100MWh in a similar project in the UK alone, and over 200MWh worldwide.”

BYD also announced its ambition to integrate its energy storage systems with wind power this year, before eventually merging the system with all types of renewable energy generation. This will give consumers and businesses a more stable supply of clean energy and increase the functionality of renewable power generation stations.

Some of the company’s innovations were also on display at the Munich trade show. These included its residential energy storage system B-Box, the Mini ES and four new state-of-the-art polycrystalline and monocrystalline silicon solar panels.

One of these panels, the double-side dual-glass monocrystalline silicon solar panel no longer bears the risk of potential induced degradation (energy loss) or “snail trail” discoloration effect, and it is designed to be more resilient to bad weather.