Sales of Heavy Trucks in Indonesia Jump in 2017

www.chinatrucks.com: Sales of heavy trucks in Indonesia are showing an improvement in the first four months of 2017. Based on data from the Indonesian Automotive Industry Association (Gaikindo), a total of 4,762 heavy truck units were sold in the January-April 2017 period, up 91.86 percent year-on-year (y/y) compared to 2,482 sold units in the same period one year earlier.

Duljatmono, Director of Marketing at the Mitsubishi Fuso Truck & Bus Corporation, explained improving sales of heavy trucks in Indonesia so far this year are the result of rising activity in the country's mining sector and infrastructure development.

However, considering not all commodity prices have recovered, activity in the mining sector of Indonesia is still somewhat limited. Moreover, there is concern about the stability of several mining commodity prices that have surged sharply recently. For example, coal prices surged in the second half of 2016. However, they have been on the decline in 2017. 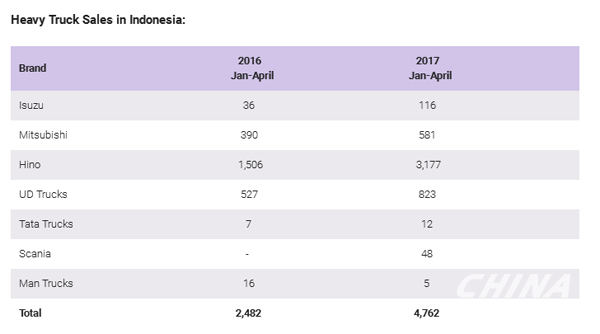