www.chinatrucks.com: On June 21, BYD Company Ltd. – a global leader in clean energy and the world’s largest manufacturer of batteries and electric vehicles – signed a letter of cooperation with Universidade Estadual de Campinas (Unicamp), in which the company commits to transfer over R$ 5 million (approximately 1.5 million USD) by 2020 to set up BYD’s first overseas Photovoltaic Research Center at the university. The ceremony was attended by China’s Vice Minister of Industry and Information Technology, Xin Guobin; BYD’s Global Vice President, Stella Li; The President of BYD’s Brazilian branch, Tyler Li; and the dean of Unicamp, Marcelo Knobel. 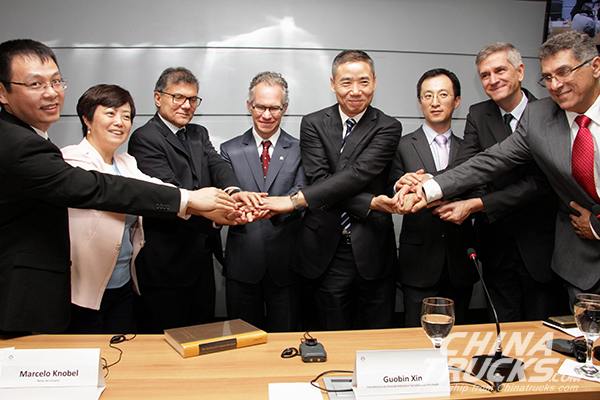 “With a global R&D staff of over 20,000 engineers and researchers, and featuring amongst Fortune Magazine’s “15 companies changing the world”, the importance BYD gives to technological research is very clear. Our company is a true leader in the technology sector, and such leadership greatly relies on investing in local research and development.” says Stella Li, BYD’s global vice president. The company opened its solar panel factory in Campinas this April and thus became the first in Brazil to offer comprehensive zero emission energy ecosystem projects – with generation, storage and transportation – to the local market.

The agreement aims to establish cooperation between BYD and Unicamp in scientific research and technological development activities. “For Unicamp, it is a great opportunity to establish the foundations of a partnership with BYD that promises to be very fruitful, by following the precept of innovation in technological development from the very start. The company chose Campinas as its base in Brazil, and we are convinced that Unicamp will be an important partner in research and development in the field of photovoltaic, which will certainly lead to the establishment of other collaborations in the future, always in search of a sustainable future.” Said Marcelo Knobel, dean of Unicamp.

BYD’s investment is a counterpart of the federal government’s PADIS (Program of Support to the Technological Development of the Semiconductor Industry and Displays), under which the company is registered. Gradual contributions will be made annually, according to Research and Development revenues. In 2017 and 2018, the percentage will be 4% and in 2019 and 2020 it will reach 5% of net sales in the domestic market. “As a high-tech company, BYD’s goal is to bring the best of the world’s technology into the country, always generating more innovation,” adds BYD President in Brazil, Tyler Li.