www.chinatrucks.com: By day’s end, with the new VNL launch behind them and the cocktail reception kicking off, the mood among Volvo Trucks North America executives was positively jubilant. 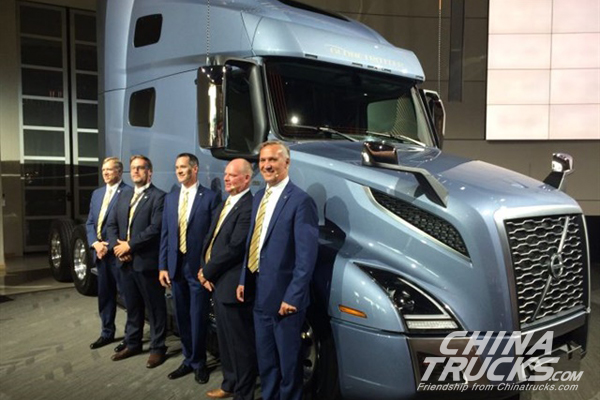 The press debut of the new tractor had gone off without a hitch. And even more exciting, from the executives’ point of view, order books for the new truck had opened earlier in the day to enthusiastic responses from Volvo customers. And while he declined to give specifics, one Volvo official described the response from North American fleets and dealerships as “phenomenal.”

It was a fitting cap to an upbeat day, which included an optimistic update on the state of the North American truck market for the year to date by Claes Nilsson, president of Volvo’s global truck operations.

Because Volvo is one of the largest truck and engine manufacturers in the world today, Nilsson naturally began by looking at global market conditions, citing the company’s current 17% market share in Europe while noting that Volvo is now the “leading” truck OEM in Russia, with 23% share in that market. The United States remains the largest truck market in the world, he added, with Germany in second place.

South American markets are generally strong, Nilsson said, although demand in Brazil is currently weak. Core markets in Asia and Africa, including South Korea, Japan, and South Africa are also strong – although Nilsson said demand in oil-producing countries is flat.

In North America, Nilsson said Volvo feels the market has flattened out and is looking for upward sales pressure moving into the second half of 2017 – a trend he is confident the new VNL tractor will be able to capitalize on.

Volvo’s North America President Göran Nyberg built upon Nilsson’s comments, noting that a strong labor market in the U.S. and a boost in consumer spending is driving Gross Domestic Product growth, which he said points to a rebounding marketing sector as the year closes out and should lead to moderate growth in that sector in 2018.

Other positive trends cited by Nyberg include low diesel prices as well as a domestic construction market currently at an all-time high level and poised for continued, gradual increases in volumes.

Looking at the state of Volvo’s North American operations, Nyberg said that to date, 93% of new Volvo trucks have been spec’d with Volvo engines, while 91% of those trucks rolled off the factory floor fitted with an I-Shift automated manual transmission. Moreover, Volvo now has more than 120,000 “connected” trucks on the road capable of remote programming to update powertrains and after-treatment systems.

Volvo now has 420 dealerships in North America, Nyberg added, and the company has invested more than $600 million in those facilities and personnel since 2010. This figure includes a recent investment of more than $38 million, which includes the new Customer Center in New River, VA, as well as enhancements to the company’s manufacturing facility there.