www.chinatrucks.com: Recently, the first hydrogen fuel powered terminal tractor in China, which is designed and manufactured by the China National Heavy Duty Truck, officially rolled off the assembly line. It is reported that this tractor is powered by renewable hydrogen fuel instead of diesel, thus pollution problems can be effectively solved. 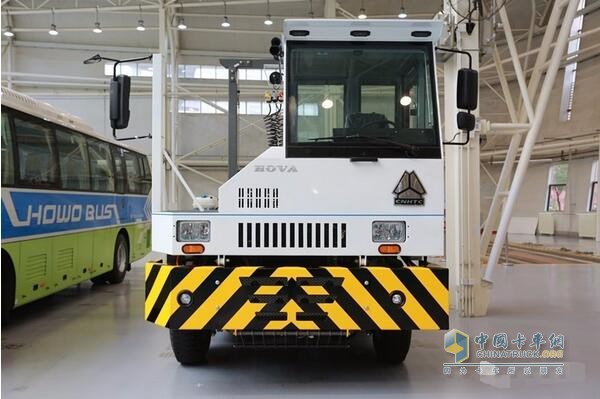 The hydrogen fuel powered terminal tractor has the characteristics of highly efficiency, cleanness, zero-pollution and zero zero-emission that not only solve the traditional low-efficiency, environmental pollution problems, but also solve the short range problem with pure electric vehicles at the current stage. For this reason, hydrogen fuel will be the future direction along which the vehicle develops. Furthermore, hydrogen fuel powered terminal tractors adopt an extended range program, in which Hydrogen cylinder can be fitted as actual need to meet a variety of operating conditions. The tractor is mainly operated on hydrogen and power battery as an auxiliary system. Hydrogen filling can be finished within 3 to 5 minutes, and there is no need to charge the battery, this avoids the problem with charging for a long time that pure electric vehicle usually encounters.

Liu Guoqing, deputy director of Sinotruck technical center, has been quoted as saying that Sinotruck has spent three years developing the first hydrogen fuel powered terminal tractor. Hydeogen fuel, as an alternative fuel for diesel, is solving air-pollution problem and will be widely applied to freight vehicles, buses and cars. As an update to traditional car, pure electric vehicle and hybrid vehicle, the fuel cell will produce electricity as long as fuel hydrogen is supplied. Speaking of hydrogen supply, just in Shandong province, there are lots of enterprises related to hydrogen production and storage. In this sense, Shandong province, even the whole nation, has the necessary condition to promote hydrogen vehicles.