www.chinatrucks.com: Timing often hasn’t been in Hino Motor Manufacturing’s favor since it opened its Wood County truck assembly plant in 2007, according to Yoshinori Noguchi, CEO of the company’s North American operations. 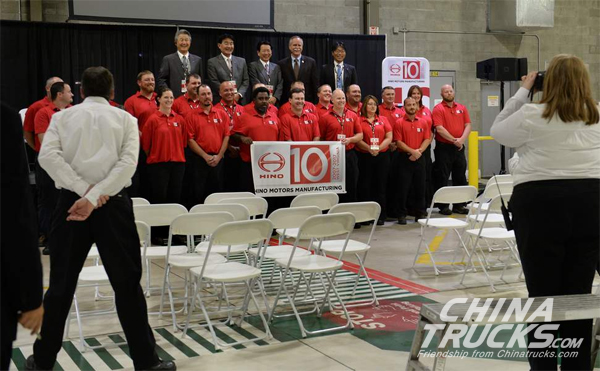 When the plant opened, the housing bubble was about to burst, triggering the 2008 financial crisis. As companies began to emerge from the crisis in 2011, a devastating earthquake and tsunami hit Japan, where parent company Toyota is headquartered. Not long after that, Japan’s currency, the yen, reached historic highs, not easy for a plant importing half of its parts from the country, Noguchi said.

“Even in these very difficult times, the West Virginia plant has steadily increased its production,” he said. “In total, West Virginia has achieved a 500 percent increase in production over the past 10 years. This is quite an accomplishment.”

Noguchi and other Hino executives joined employees and state officials to celebrate the manufacturer’s 10th anniversary in the Mountain State Tuesday at the plant. 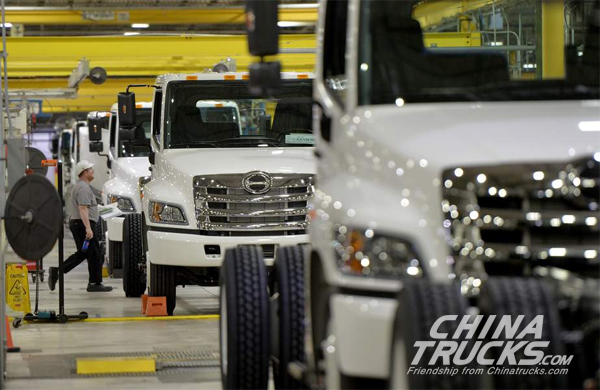 “We’d been reducing manufacturing jobs, and unemployment had been increasing rapidly,” McKinley said. “But [Hino] stayed with it, you said, ‘We’re going to make a commitment here in West Virginia.’ And now look at what’s happening here as things improve.’”

Hino purchased the plant for $8.6 million after it sat vacant for two years following the closing of Walker Systems, a wire and cable system manufacturer.

The 245,000-square-foot plant has jumped from around 70 employees to 300 employees and invested roughly $28 million in the state with various expansions since it opened 10 years ago, according to Steve Stalnaker, the plant’s vice president and manager. It specializes in the production of medium-duty trucks, which typically are used for delivery and moving companies.

Tim Matheny, president of Matheny Motors, said his four Hino truck dealerships have sold 4,000 new Hino trucks since the plant began operations, including 400 to the state Division of Highways.

“West Virginia is very fortunate to have Hino employ 300 hardworking people to build a truck that has become the new standard in the medium-duty truck marketplace,” Matheny said.

The West Virginia Economic Development Authority has helped the plant’s development efforts in recent years. It leased 11 acres of land next to the plant for Hino’s 2015 expansion and approved a $25 million bond for Hino to purchase additional equipment that same year.

“In 10 years you all have done so much for this great state, I can tell you from the bottom of my heart, we love all of you more than you will ever know,” Justice said. “As time goes forward in the future, whatever events may take place in the U.S., I hope [Hino] will always consider West Virginia.”

As for any future Hino plant expansions, Stalnaker said Hino is “continuing to evaluate what the demands are” in the market.