The company’s roster of first customers also should help the truck gain exposure. 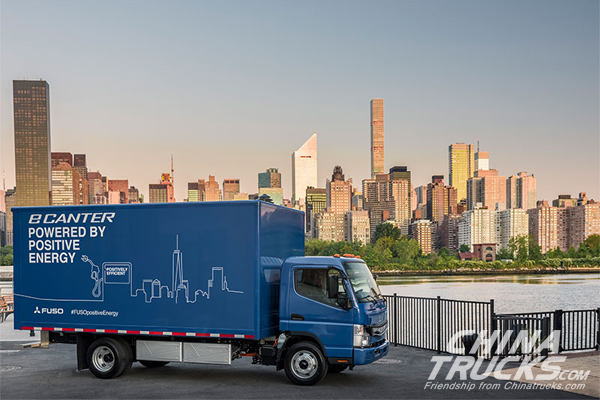 At a launch ceremony Thursday in lower Manhattan, the company announced that its first U.S.-spec eCanters would be put into service with Habitat for Humanity New York City, the New York Botanical Garden, the Bronx Zoo and Big Reuse Brooklyn, a Brooklyn-based retail store for salvaged and surplus building materials and furniture.

The daily truck operations of the non-profit organizations cover most of the city and its environs, ensuring that eCanters will be highly visible.

The company also said that the eCanter will make a West Coast debut later this year when the University of California at Irvine takes delivery of 10 of the electric trucks.

Additionally, delivery service giant UPS said it has signed on as the company’s first commercial customer, leasing three eCanters for its growing fleet of alternative energy vehicles. UPS has not yet determined where the trucks will be used.

“Electric trucks make our fleet both cleaner and quieter,” said Carlton Rose, president of global fleet maintenance and engineering for UPS. “We have a long-standing global relationship with Daimler, and we welcome the opportunity to trial the Fuso eCanter.”

“We are very excited with the strong message their production start sends to the market on the viability and inevitability of electric drive in key beachhead applications,” Van Amburg said.

Although it looks pretty much like an ordinary modern box truck, the eCanter shown Thursday is distinguished by the absence of tailpipes and diesel rumble. It can be configured with a variety of bodies.

“This isn’t a custom-built electric semi that looks fancy but won’t be in customers’ hands for four or five years, it’s a delivery truck that’s available now,” Marc Llistosella, head of Daimler Truck Asia and president and chief executive of Mitsubishi Fuso Truck and Bus Corp., told Trucks.com. The company uses the Mitsubishi name in its corporate name and in the U.S. but is known simply as Fuso in most of the rest of the world. Daimler Trucks also owns the Freightliner brand in the U.S. 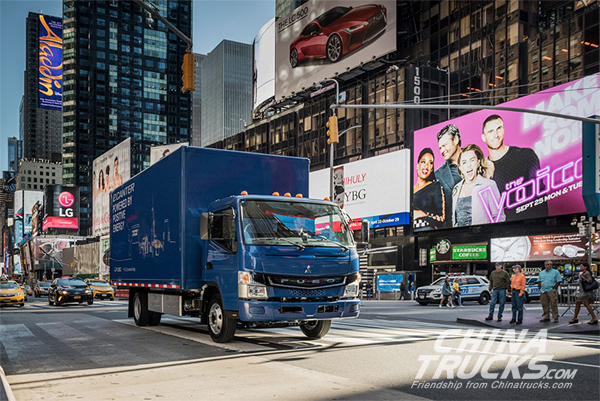 The eCanter launch comes at a time when others are pushing into heavy-duty electric vehicles.

“I think they will make headway with this electric version of the Canter,” said Antti Lindstrom, trucking industry analyst at IHS Markit.

The medium-duty, inner-city delivery truck market “is a very realistic niche for electric trucks,” he said.

“I'm skeptical about heavy-duty electric trucks” such as the Class 8 truck Tesla is developing, “but city delivery is the way to go and Mitsubishi Fuso, with its Daimler backing, is in a very good position,” Lindstrom said.

Unlike most other electric trucks that are either retrofitted internal combustion models or the products of small start-up companies, the medium-duty eCanter is the first battery-electric commercial truck to be manufactured in series production by a major truck builder, Llistosella said.

Standard equipment on the eCanter includes six liquid-cooled, 420-volt, 13.8 kilowatt-hour lithium-ion batteries, for a total of 82.8 kWh. Payload capacity ranges up to 9,000 pounds, depending on body type. Estimated range is between 60 and 100 miles, depending on loads and factors such as terrain. Recharging time will be approximately 8 hours.

Compared with a similar diesel truck, operators of the eCanter will save about $1,000 for each 6,200 miles of driving on fuel, maintenance and repairs, according to Mitsubishi Fuso’s estimates.

The truck will be among the first from Mitsubishi Fuso that will employ Mobileye’s 6 Series Collision Avoidance System.

After Tesla “brought electric vehicles out of the nerd box and made them cool, Daimler either needed to be part of the leading team, or a defender of the status quo, and we’ve opted to take innovation by the horns and go,” Llistosella said.

The eCanter is built on the same assembly lines in Japan and Portugal where workers churn out more than 70,000 diesel Canter trucks each year.

Although high-volume mass production is possible – and planned for – only 50 eCanters will be available in the U.S. this year, Llistosella said. An additional 50 have been earmarked for Lisbon, Portugal, and 50 more for the Tokyo area, where the 7-Eleven chain of convenience stores will be a major customer.

Production will increase over time, with 500 eCanters scheduled to roll off the lines in the next two years. “Larger scale production” is slated to begin in 2019, he said.

Entering the electric truck space “is still risky for us,” Llistosella told Trucks.com “We know the [truck] business well, but we don’t know the future. Will there be better batteries in 12 months? We don’t know.”

That’s why the company is taking a cautious approach to production, he said.

The first trucks will be lease-only “so that our customers are not punished for risk-taking. We will lease with upgrades to the latest technologies as things change,” Llistosella said.

Electric trucks still are pricey enough that they require government incentives. Mitsubishi Fuso said earlier this year that it expected the eCanter price will be 15 percent to 20 percent more than comparable diesel models.

“But they are getting closer to commercial viability,” Llistosella said. “The prospects are even better in the near future. This is the year we are at the tipping point and have to stop talking and start producing.”

While there are no federal government incentives for commercial electric trucks, as there are for electric passenger vehicles, several states and municipalities offer financial assistance to fleet operators looking to reduce their emissions and fuel consumption by adding electric and other alternative fuel vehicles to their operations.

“Based on the market data we track in multiple marketplaces, we expect the next few years will see a steep ramp-up in electric units sold in the medium-duty pickup and delivery and shuttle bus space, building on successes in transit buses,” Van Amburg said.

Industry analysts generally expect the next decade to be a building period – not a takeover march – for the electric commercial truck segment.

“This new technology may be important in 10 years, but it’s not driving the [truck] market right now,” said Noël Perry, analyst at FTR Transportation Intelligence. “What is driving the market is good business conditions – there’s a likelihood that 2018 is going to be a really good year.”

While customers may be exploring alternative fuel-powered vehicles and electric trucks, which are attractive for short-haul applications like refuse, bus and port drayage operations, the infrastructure just isn’t available for wide use.

“As long as the price of diesel is low, there really won’t be a need for alternative fuels, but maybe in 10 years as the range improves, the demand might be there,” Perry said.

Mitsubishi Fuso’s plans are a case in point.

The company sees demand in numerous areas of the U.S., but decided to limit its launch to metropolitan New York because it is a “hero area that a lot of people look at, and we need” that exposure, Llistosella said.

As part of its eCanter development program, Daimler Trucks said Thursday it has become a major investor in an Israeli nanotechnology materials company that is developing high-capacity electric vehicle batteries that can be charged in a matter of minutes.

The company, StoreDot Ltd., was founded in 2012 and recently showed a proof of concept “FlashBattery” with a 5-minute charging time.