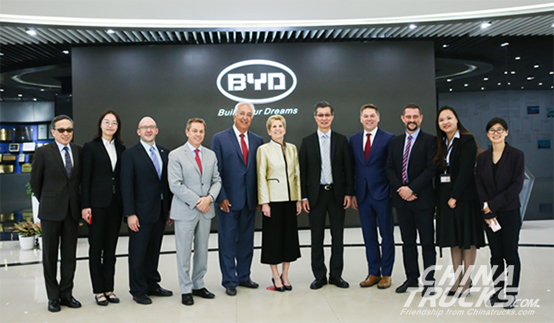 “The strength of our technology and commitment to localizing the supply chains explains why we have won over governments and private consumers from our home base in China to Canada and Australia,” said Ted Dowling, vice-president of BYD Canada. “We look forward to working together with the Ontario government to provide environmentally friendly transportation and energy storage options for its residents.”

BYD said in a press release that it is working on many orders that will bring final assembly to the province of Ontario. It said it has partnered with Loblaw to help electrify its fleet. The Globe & Mail reported the company will start its production in Ontario by shipping technology and components from China that will allow it to build garbage and delivery trucks here.

“Ontario is a global leader in the fight against climate change,” said Premier Wynne. “We have taken major actions to reduce greenhouse gas emissions, including eliminating all coal-fired electricity in our province and joining with the state of California and the province of Quebec to create the largest carbon market in North America and second largest in the world. All of the profits from that market in Ontario are re-invested to help families, businesses and buildings become even more energy efficient. Innovative green businesses like BYD are key to continuing our progress, so I was pleased to meet with company leaders today during my third mission to China.” (www.chinatrucks.com)