From November 21 to 22, the Second Enlarged Conference of the XCMG Overseas Market Strategy Advisory Committee under the theme of “Mutually-Beneficial & Everlasting Cooperation” was successfully held in Nanjing, Jiangsu Province. The XCMG Overseas Market Strategy Advisory Committee and some distributor representatives totaling nearly 100 people gathered together to share the main achievements and development mode of XCMG overseas business and discuss its internationalization strategy and localization operation. At the conference, the participants also exchanged views about the development strategy and cooperation mode of cross-border E-commerce as well as new products and business such as automobiles. 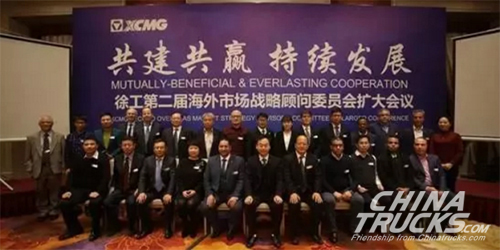 XCMG, a 74-year construction machinery company in China, is the seventh largest construction machinery manufacturer in the world and the only one Chinese company listed among the top 10 in the field. Its inventory of overseas products has exceeded 200,000 units. Customs data show that from January to October 2017, XCMG’s total exports increased by 82.67% YoY and its export market share increased 3.5 percentage points, 11 times higher than that of the second largest exporter. Its export value was $ 281 million more than that of the second highest exporter. It is ranked No.1 in both brand and self-run export among Chinese brands. XCMG has become the No. 1 brand in Africa, West Asia, North Africa, Central Asia and the Asian-Pacific region in terms of export volume. These achievements are attributed to the continuous promotion of XCMG internationalization strategy, the implementation of the golden standard, “Leading technology, Everlasting products”, that is proposed by Chairman Wang Min, and, more importantly, XCMG long-term commitment to the industry and its customers.

At the conference, Sun Jianzhong, Vice President of XCMG, Chairman of XCMG Import&Export Co., Ltd, and Chairman of the Overseas Market Strategy Advisory Committee, expressed his gratitude to all committee members and distributors for their efforts in overseas market expansion. At the same time, he encouraged the distributors to support each other for mutual benefits on the basis of XCMG internationalization strategy and jointly realize the goal of securing XCMG a position in the global “Top 3” by 2025. Subsequently, Liu Jiansen, Assistant President of XCMG, General Manager of XCMG Import&Export Co., Ltd and Vice Chairman of the Overseas Market Strategy Advisory Committee, introduced XCMG achievements in overseas market development in 2017 and business strategy in 2018. He introduced the key overseas projects of XCMG in a storytelling style, and the committee members and distributor representatives present were deeply inspired. Finally, product managers of different divisions explained the new achievements and new programs of scientific and technological innovation at XCMG in fluent English and won applause from the attending committee members and distributor representatives!

As a leader in China’s construction machinery industry, XCMG continuously provides complete sets of equipment solutions for infrastructure construction in the world. XCMG golden products are seen in global major projects such as the North-South Expressway in Montenegro, the construction of the Kuantan Deepwater Port Wharf in Malaysia, the Sino-Laos Railway, the Karot Hydropower Station in Pakistan, the Cross-sea Bridge in Maldives, the Padma Bridge in Bangladesh, and the 2022 Qatar World Cup Stadium. In line with the “Belt and Road Initiative”, XCMG and local dealers work hand in hand to provide high-quality equipment and integrated services for the infrastructure construction in the countries along. In the meantime, the international layout of XCMG has been further deepened. In 2017, its branches in Kazakhstan, Indonesia and the United States were put into operation officially. The construction of 4S stores in Bangladesh, Nepal, Canada and the Philippines and the building of spare parts warehouses in overseas regions such as Kenya have been completed. The regional marketing, service and spare part systems are further enhanced and improved. (www.chinatrucks.com)