DHAHRAN Expo had witnessed under the patronage of Prince Saud Bin Nayef Bin Abdulaziz, governor of the Eastern Province, a unique event that lasted for three days. Juffali Commercial Vehicles availed this opportunity and organized its Commercial Vehicles Exhibition. It also witnessed the launching ceremony of handing over the new Mercedes-Benz trucks. The exhibition also included a number of pavilions and events that give attendees a complete picture about the manufacturing of trucks and state-of-the-art safety systems which are enjoyed by Mercedes-Benz trucks and a value added to its distinguished record in this field, which gained the trust of customers around the world over long years. 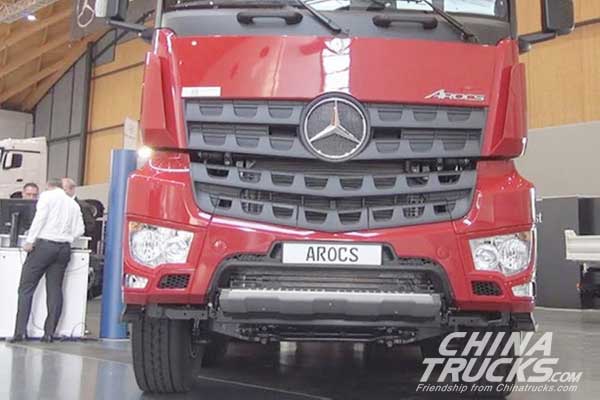 Khaled Al-Juffali, the Vice Chairman of E.A. Juffali & Brothers, and on behalf of all the employees of Juffali Commercial Vehicles Company, thanked Prince Saud Bin Nayef Bin Abdulaziz for his patronage of this exhibition, which is one of the largest exhibitions used to be held by Mercedes-Benz around the world. He pointed out that the selection of the eastern region of the Kingdom for holding this exhibition came after a careful study which confirmed that most of those who are interested in this industry are existing in this part of the Kingdom.

Heiko Schulze, CEO of Juffali Commercial Vehicles and NAI Factory, said the exhibition witnessed this year the launch of two new models of Mercedes-Benz trucks (Actros and Arocs) which happens every 15 years, and will join the fleet of trucks that the company already offers. The new vehicles have the best safety techniques for the drivers of the vehicles and others as well as features that make driving this type of vehicles easier and more efficient than ever before. During the exhibition, the keys of the two newest trucks been sold for the first time in MENA region were handed over to Al-Khaledi Holding Company.

Emad Dafterdar, Marketing and Sales Manager, at Al Juffali Commercial Vehicles, said that the establishment of such exhibitions is part of the company’s plans to more introduce the modern technologies applied to Mercedes-Benz trucks and display them in a manner closer to the public in general and our customers in particular to give them the opportunity to see how these trucks have been distinguished as well as to know the secret of their leadership for many years.

For more than 30 years, E.A. Juffali & Brothers has been the first company to establish a truck and bus assembly factory besides the production of small trucks and vehicles. Thanks to the concerted efforts of its team and the generous assistance of its partner (Mercedes-Benz), it succeeded in building the National Automobile Industry Factory (NAI), which quickly has been considered among the best factories in the world. — SG (www.chinatrucks.com)