The 50,000th Isuzu N-Series Truck Rolls off Line in America

Isuzu Commercial Truck of America has announced that the 50,000th gasoline-powered Isuzu N-Series truck rolled off the assembly line in Charlotte, Mich. on Aug. 1, 2018. 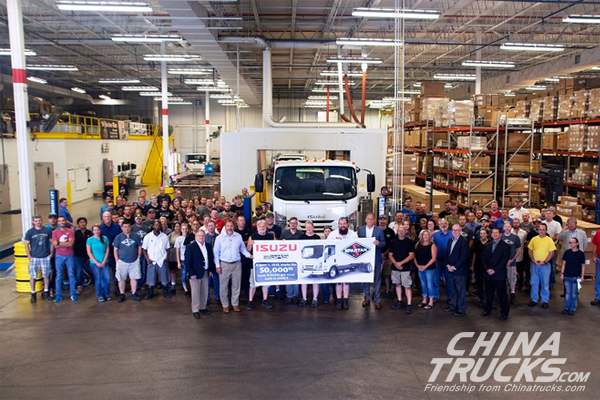 It was a new milestone for the truckmaker that first began assembly of the gasoline-powered N-Series at Spartan Motors in April 2011.

“We anticipated the demand for gasoline-engine low-cab-forward trucks over seven years ago, and the assembly of our 50,000th truck proves that our instincts were correct,” said Shaun Skinner, president of Isuzu Commercial Truck of America.

In N-Series gas-powered trucks feature a Vortec 6.0L V-8 engine that produces 297 hp and 372 lb.-ft. of torque. The engine is mated to a 6-speed automatic transmission with double overdrive and lock-up torque converter to improve both fuel economy and performance.There is also an optional version of the engine that can be converted to run on either compressed natural gas or propane autogas.

“We are proud to offer our gas-powered N-Series truck in a wide range of configurations to meet our customers’ needs,” said Skinner. “And together with our dealerships and Spartan Motors, we’re looking forward to the next 50,000.” (www.chinatrucks.com)