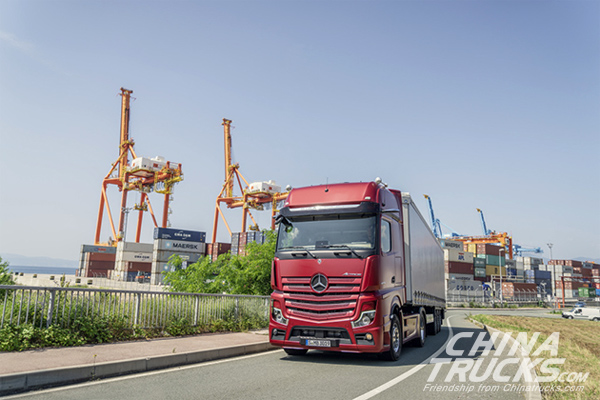 World media will get a first look at the Actros at the Premiere Night of the international event.

It will feature a new Multimedia Cockpit, with what Mercedes-Benz Trucks confirmed is an updated interface between driver and vehicle enabling seamless connectivity with digital services and assistance systems.

Fleet managers will be able to monitor the Actros in real time without delay.

Active Drive Assist will, reportedly, provide the driver with access to semi-automated driving at all speeds for the first time in a series production truck Mercedes-Benz said in a statement.

The new Mercedes-Benz Actros is anticipated to consume up to three per cent less fuel than its predecessor. An improved Predictive Powertrain Control system has been touted as offering an increase of five per cent in fuel efficiency on regional routes.

“The new MirrorCam replaces the large outside mirrors and helps to reduce wind resistance considerably due to a streamlined shape and smaller dimensions,” Mercedes-Benz Trucks said in a statement.

“The new, concave-shaped cab side deflectors also improve aerodynamics, as the optimised design of the roof spoiler does.”

Options for configuring the Actros are reportedly many with the new truck available to order from the commencement of the 2018IAA show.

The first vehicles are expected to be delivered to customers in the spring of next year. (www.chinatrucks.com)