The Ford F-Max (pictured) was crowned International Truck of the Year 2019 (IToY) at the IAA Show in Hannover today (19 September). 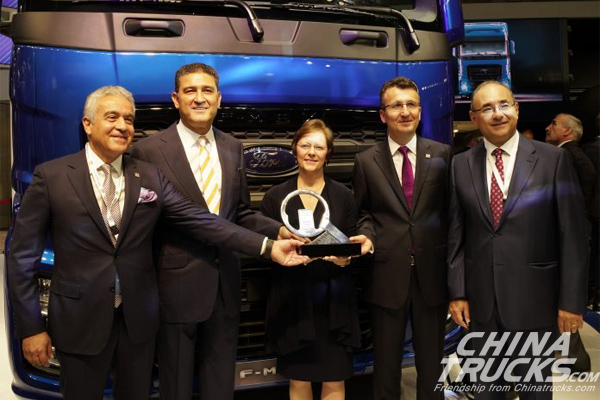 The jury, which consists of 23 commercial vehicle journalists from across Europe, was impressed with the newcomer, which features a flat floor, 500hp Ford Ecotorq engine and ZF TraXon gearbox. They praised the efficiency and advanced characteristics of its driveline, including eco-roll, adaptive cruise control and GPS-based predictive cruise control.

IToY chairman Gianenrico Griffini said: “With the introduction of F-Max, Ford Trucks has delivered a fine engineered tractor that can be a meaningful new player in the highly competitive segment of long-haul transport.”

These sentiments were echoed by UK jury member Will Shiers, who said: “While Ford’s previous Turkish-built trucks have been competent products suited to the domestic and nearby markets, the F-MAX is entirely different. It is capable of competing with the established players on the global stage with no allowances asked for or needed.”

Shiers said: “This truck has the ability to save lives, and is the first platoon I’ve seen that actually makes sense.”

For the International Van of the Year, Peugeot, Citroën and Vauxhall were named the joint winners for their new small van. The Partner-Berlingo-Combo trio convincingly claimed the award with127 points, while second-placed Mercedes-Benz Sprinter scored 92 points. Third place was awarded to the Ford Transit Connect, which received 33 votes from the 25 jury members.

The victory is the second IVoY win for Peugeot-Citroën’s light van, having previously won the award in 1997 for the first-generation van, as well as on three other occasions for its mid-sized and compact vans. Vauxhall-Opel too has tasted success in the competition for its Astravan and Vivaro, but this is the first victory for the newly united PSA Group.

Judges praised the distinctive individual designs of the three vans, the comfortable and enjoyable driving experience, as well as new innovations for the sector, including the overload indicator.(www.chinatrucks.com)