Location:Chinatrucks > news > industry news > Reverse Camera to Come as Standard on All Hino Trucks Sold in the Aussie Market

We wouldn’t recommend you buy a new truck in 2018 that doesn’t have the best safety features, one of the most effective being a reverse camera. 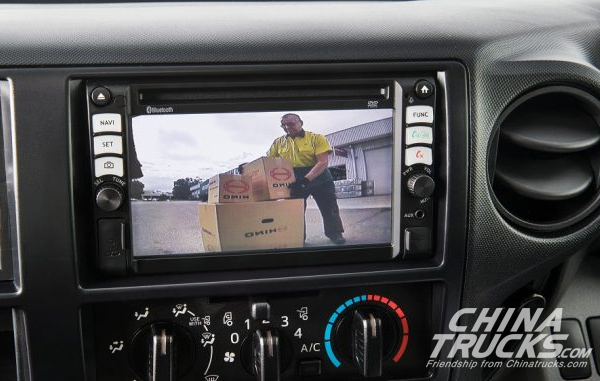 Now comes confirmation that by the middle of next year every Hino truck sold in Australia will come with the reversing tech as standard.

Confirmed this afternoon by the big-selling Japanese truck and bus brand, the standard fitment of a reverse camera across Hino’s truck range is believed to be a first in the Aussie market.

First introduced as standard equipment on the Hino 300 Series in 2016, then the 500 Series Wide Cab the following year, the next Hino product to boast a camera system will be the soon to arrive Hino 500 Series Standard Cab.

That new offering has been confirmed for a November arrival in dealerships, we’ll bring you final pricing and specification details for the new Hino model when they are supplied to us.

Daniel Petrovski, Hino Australia’s Manager of Product Strategy, also confirming the 700 Series will then get a reverse camera as standard from early next year.

“Drivers will benefit from almost 360-degree vision for improved safety when manoeuvring so they can see and hear what is happening behind them when reversing, loading and unloading.

“This is in addition to the already exceptional vision provided by the combination of generously sized windscreens, large electronically adjustable heated mirrors and convex spotter mirrors which are standard on every Hino truck.” (www.chinatrucks.com)