DEUTZ Fully Out of the DEUTZ Dalian Joint Venture with FAW

DEUTZ AG announced on 3 July 2018 that it intends to fully withdraw from the DEUTZ Dalian joint venture with First Automotive Works (FAW) in China. DEUTZ AG has now sold its 50 per cent stake in the company to the joint venture partner FAW following approval from the Supervisory Board and agreement on the necessary contracts. The parties have agreed not to disclose any commercial details. The transaction is subject to approval by the Chinese authorities. 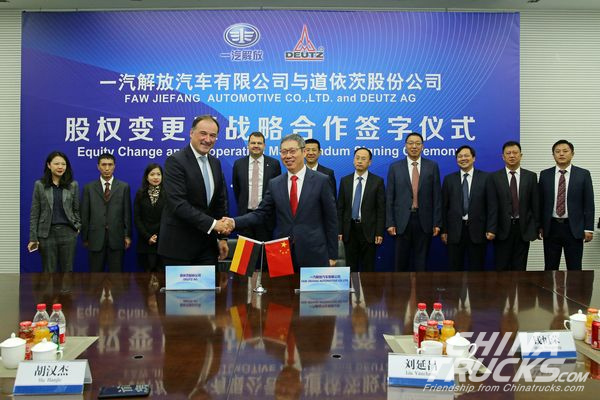 Despite ending the long-running joint venture, DEUTZ and FAW will continue to collaborate on a basis of a customer-supplier relationship, and DEUTZ can still procure engines for off-highway applications from FAW upon request. To this end, the two companies have reached an agreement to explore further possibilities for collaboration in future. The withdrawal from the DEUTZ Dalian joint venture is not expected to significantly impact on earnings this year.

“This step allows us to realign our Chinese activities. We are now reorganising our presence in China in order to generate stronger growth and be even more successful there. Talks on new alliances with major local partners in the construction equipment and agricultural machinery industries have already reached an advanced stage,” says Chairman of the DEUTZ Board of Management, Dr Frank Hiller. The Company plans to publish further details in the current year. (www.chinatrucks.com)