Saudi Aramco, which has one of the biggest crude oil production operations and reserves in the world, said Friday it has teamed up with Chinese researchers, a company that builds diesel and natural gas engines, and a petrochemicals company to study ways to lower emissions. 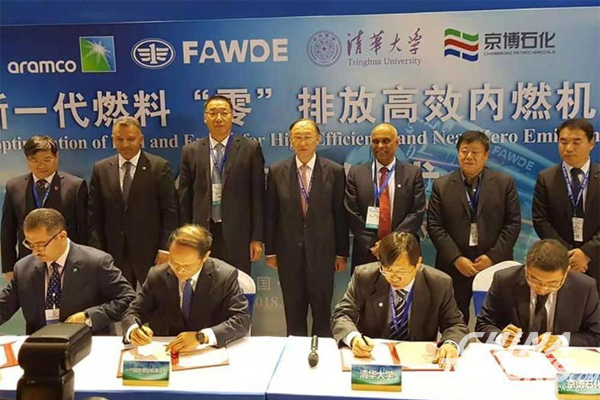 Chambroad Petrochemicals, located in the Shandong province, provides fuel and chemicals to 16 provinces in China, including Beijing and Shanghai. It produces "clean fuels" but petrochemicals is its main business.

Faw "will provide prototype engines and after-treatment systems, as well as conduct system integration and vehicle demonstration," it added.

Faw is one of the biggest vehicle manufactures in China with a product line that includes sedans, SUVs and trucks. Faw Jiefang is one of its units.

Tsinghua University, based in Beijing, is one of the biggest research centers in Asia and home to 149 research institutes and 13 laboratories.

Saudi Aramco wants to increase the company's participation in fuel and petrochemicals production, in part to rely less on hydrocarbon extraction as it has been doing for decades, Khalid Al-Falih, the country's energy minister, said in early October.

While Saudi Aramco is the world's largest company in the upstream, with production of about 14 million barrels of oil equivalent per day and 260 billion barrels of oil, as well as 300 trillion cubic feet of gas as reserves, the downstream needs development, he said at that time.

Once Saudi Aramco has a better balance of upstream and downstream it will carry out an initial public offering, scheduled for earlier this year but postponed, he said. (www.chinatrucks.com)