Great Wall, Ford Get Ready for Surging Demand for Pickup Trucks in China

Grey Liu bought his third vehicle four months ago - a Foton pickup truck, lured by its $7,000 price tag and its ability to transport his sports motorcycle to the grasslands of northern China where he likes to ride. 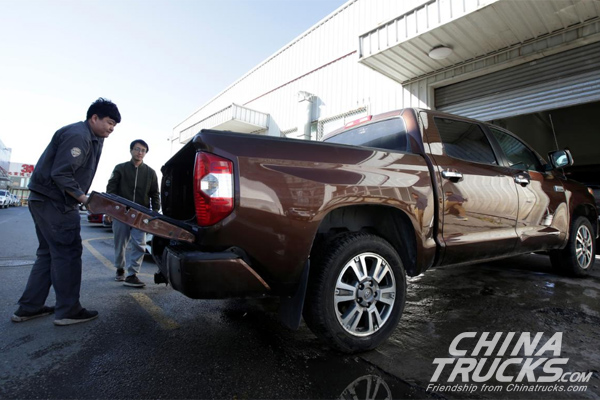 The Beijing-based businessman is among a growing number of drivers in China keen on pickups - either for leisure or just because they like them, expanding the market beyond traditional demand for farm, construction and maintenance work.

While calling his pickup “a big toy”, the 35-year-old notes some of his friends also have one. “There are more and more people like us,” Liu said.

Pickup demand - both work-related and the newer interest from mainstream consumers - has climbed on the back of an easing in government restrictions and last year China became the world’s second-biggest pickup truck market.

Signs this year that rules may be relaxed further are prompting industry executives and analysts to talk of a potential doubling or even greater jump in demand. That in turn is spurring Great Wall Motor Co, China’s largest pickup manufacturer, and Ford Motor Co, the maker of the most popular U.S. pickup series, to bolster product lines.

“We believe demand for multi-purpose pickup trucks will soon start taking off in a major way,” she said in a written statement, declining to provide further details.

The new truck will be priced much higher than current models and will be one of five all-new pickups in the next three years, sources familiar with Great Wall’s plan said, declining to be identified as they were not authorized to speak on the matter.

At least one of the five would be an electric model, they added. 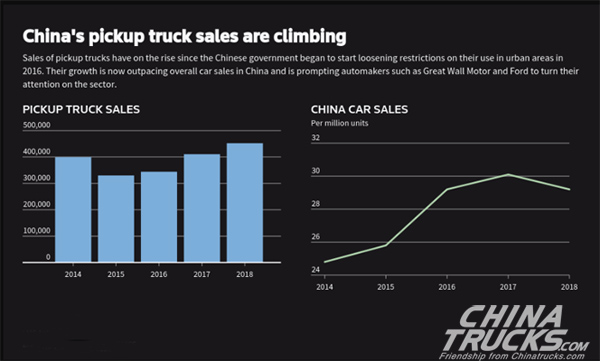 Although overall demand in the world’s biggest auto market fell last year for the first time since the 1990s, pickup truck sales rose 10 percent to around 452,000 vehicles for a fourth straight year of growth, according to consultancy LMC Automotive.

That helped China overtake Canada as a pickup truck market, although it is far behind U.S. figures of just under 3 million. Like much of the world, the segment remains niche in China, accounting for less than 2 percent of overall sales. That contrasts with 16 percent for the United States and over 40 percent for Thailand.

Chinese demand grew after the government in 2016 allowed pickups to enter some urban areas in four of 31 mainland provincial-level areas. Last year, requirements that pickups have large unsightly labels that clearly marked them as commercial vehicles were dropped, making the vehicles far more attractive to mainstream consumers. 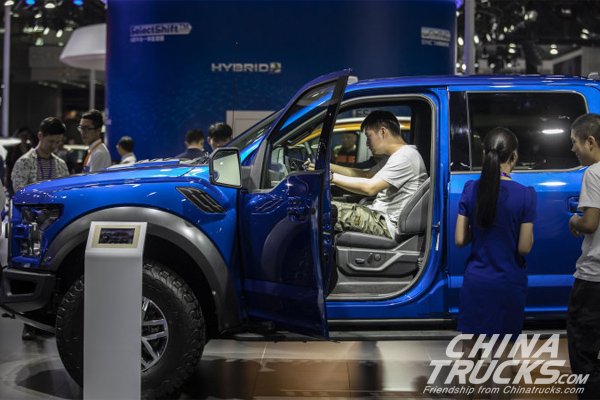 Then in January, China’s state planning body said it would steadily relax restrictions on pickups in cities - part of measures aimed at lifting consumer spending. It did not, however, say when or where rules might be eased.

Depending on how extensive that easing is, annual pickup demand in China could double or triple even if limited parking options hobble demand in the country’s biggest cities like Shanghai, executives and analysts say.

Great Wall’s new leisure pickup would be similar to Ford’s mid-sized Ranger and priced at more than 200,000 yuan ($29,800), a mark up of at least 70 percent over its current most expensive pickup, sources familiar with the plan said.

“We aim to make this higher-end pickup feel more like a passenger vehicle and it will have an interior design like our SUV models,” said one source.

According to a separate source, the vehicle is part of the company’s plan to eventually enter the United States, although the model would likely have to be modified. Great Wall had aimed to enter the U.S. market in 2021 but U.S.-Sino trade tensions have currently made exports from China uneconomical.

“Ford continues to see growing opportunities in China’s pickup truck market, because of a combination of regulatory conditions and growing consumer interest,” a spokesman said in an e-mailed statement.

Zhejiang Geely Holding Group Co Ltd is developing a new electric pickup, a company source told Reuters, adding it would be made by its Yuan Cheng Auto unit. The source, who declined to be named as the plans are not public, did not provide further details.

Some global automakers, however, have yet to jump into the market feet first and their models are primarily imported and sold by independent dealers.

Li Jiyuan, who works at a dealership that sells Toyota Motor Corp and RAM pickup trucks, says business has been hit somewhat by trade war uncertainties. To drum up more traffic, the dealership will expand into sales of BMW sport utility vehicles and explore online sales, he added.