April 11 marks the world’s Manufacturing Day. With a growing interest in re-manufacturing industry in recent years, the world is making an all-out effort to achieve sustainable development. Cummins, the world’s leading engine maker, has been taking a number of concrete measures to develop more environmentally friendly engines and help more and more people live a more greener lives. 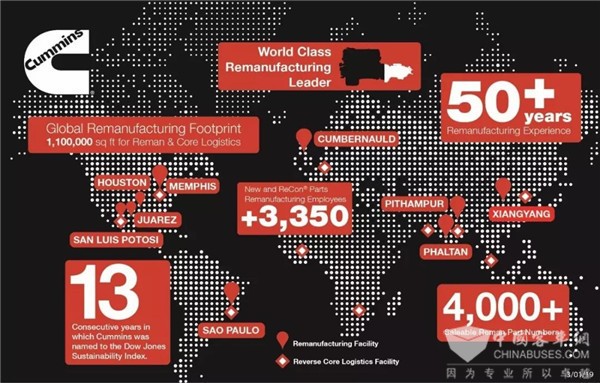 With 50-plus years rich experience in remanufacturing, Cummins boasts eight remanufacturing bases across the world with over 3,350 employees. As one of the pioneers in the global remanufacturing industry, Cummins is committed to creating more added value for its global customers and achieve more sustainable development.

“We have been and will continue injecting new dynamics to our rich pool of products,” said Rob Enright, General Manager of Cummins New Spare Parts & Remanufacturing, which focuses on remanufacturing those used and worn-out engines and engine spare parts sold by Cummins. For decades, Cummins has been improving its remanufacturing process for long cylinders, short cylinders, L10, M, N and ISX/QSX heavy-duty engines as well as B, C and ISL/QSL medium-duty engines, injecting a new life to these seemingly worn-out products.