Daimler Rolls Out of Its 750,000th Heavy-duty Trucks at Clevela Plant 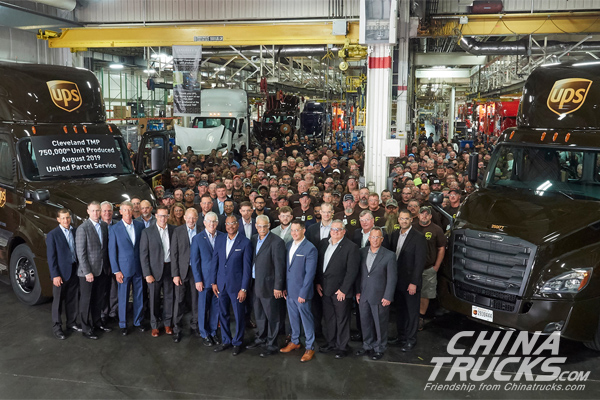 United Parcel Service (NYSE: UPS) took delivery of the truck during a ceremony at the plant on Monday, August 26.

“Over the past 30 years, our Cleveland plant has served as the foundation for our North American manufacturing operations and has been an integral part of our growth, innovation and leadership,” said Roger Nielsen, Daimler Trucks North America CEO and president.

“As we continue to evolve our product offerings and technologies, the Cleveland facility will remain a critical part of our strategy and success,” Nielsen said.

The Cleveland Truck Manufacturing Plant is the largest Freightliner Trucks manufacturing plant in the U.S. In addition to the diesel- and natural gas-powered Cascadia, tt produces the Coronado and Columbia cab-over-engine models for export to Australia and New Zealand. The plant also produces Western Star 4700, 4900 and 5700XE model trucks.

Daimler has invested more than $350 million in the facility, which has more than 2,200 employees.

Daimler told German media in 2016 that it planned to make Mercedes-Benz-branded Actros heavy-duty trucks in China by the end of the decade.

According to Reuters, Beijing Foton Daimler Automotive (BFDA) will add Actros trucks to its production lines. Currently, those production lines are used primarily to manufacture Auman trucks, the sole truck brand of the joint venture.

The joint venture will revamp its No. 3 plant, which has a capacity of 60,000 trucks annually, to manufacture Actros and Auman trucks. All Mercedes-Benz trucks sold in China currently are imported. They are priced higher than the domestically built Auman trucks.