2019 for XCMG was quite a year. From record-breaking new products, prestigious brand presence to excellent sales performance and more, all these remarkable moments together consist a memorable 2019. We have selected the top 10 highlight moments in 2019 and let’s take a look back at them now to see what an amazing year it has been. 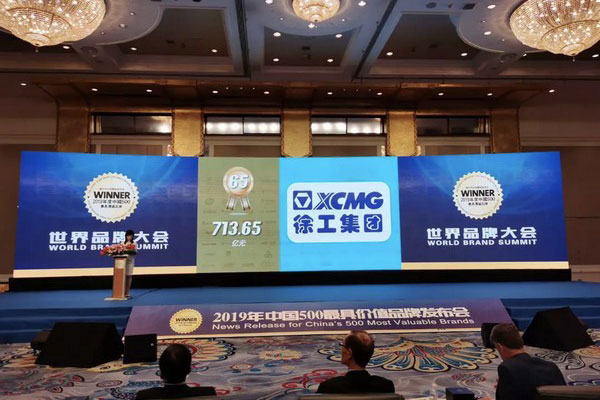 Domestically, XCMG remains the No.1 construction machinery company with excellent performance in multiple fields. As patriots, XCMG has maintained a strong growth momentum in the competitive market and has been leading the Chinese construction machinery industry for 30 consecutive years. In 2019, XCMG continued to lead as the highest-ranking company with major Key Operational Indicators reaches new records. According to the China’s 500 Most Valuable Brands list published by World Brand Summit, XCMG again ranks top in the construction machinery industry with a company value of 10 billion dollars. XCMG has ranked top on the list for 6 consecutive years.

2.Top 6 global construction machinery company and was named in The World's 500 Most Influential Brands. 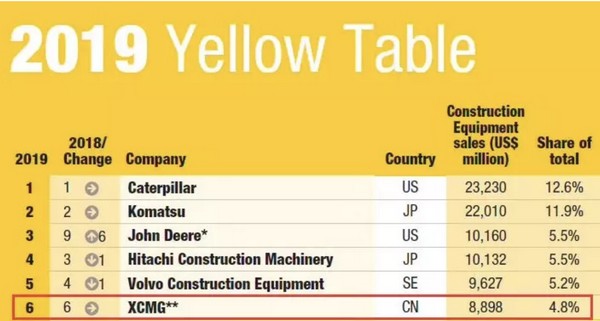 Apart from keeping a strong grow domestically, XCMG has also accelerated its development into the international market. In December, the World Brand Lad released the 2019 "World's 500 Most Influential Brands" and XCMG was named on the list for the first time. XCMG was one of 40 Chinese companies to receive the accolade and one of the only four construction machinery manufacturers globally to make it into the ranking. 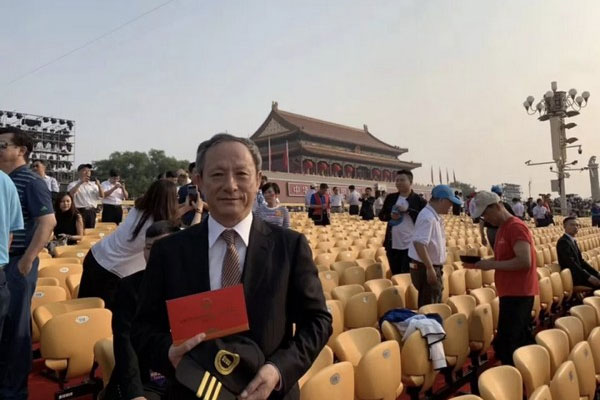 2019 also marks the 70th anniversary of the founding of the People's Republic of China. On Oct. 1st, Mr. Wang Min, the Chairman of XCMG, and Sun Li, designer of XCG88000 - the world's largest crawler crane, were invited to attend the China’s National Day Parade. XCMG machines were also in the parade as logistic vehicles. This distinguish invitation represents the national’s recognition of XCMG as the leading construction machinery company and of its accomplishments in the past 30 years.

4.Taking the No.1 ranking in export.

In 2019, XCMG has achieved consecutive wins in export. In March along, XCMG exported more than USD 100 million and ranked No.1 across the industry. XCMG’s expansion to the international market also achieves a new stage. As of June 2019, XCMG has established more than 20 overseas subsidiaries, 2,000 service terminals and 40 offshore spare parts centers. XCMG's IoT (Internet of Things) platform has connected 680,000 types of equipment to provide full-coverage services at all times. 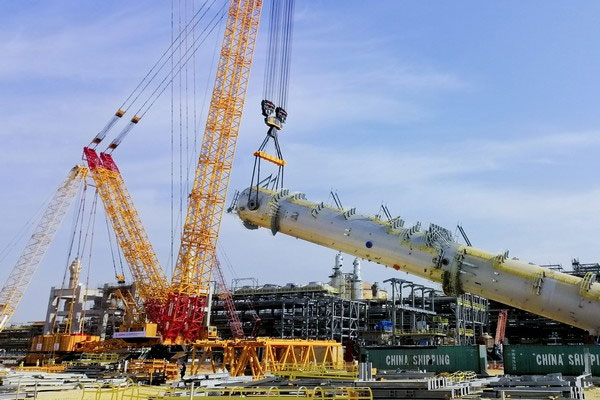 As China's leading construction machinery manufacturer, XCMG is always at the frontline of the industry. In 2019, XCMG machinery products have once again proved its industry-leading capacity.

6.XCMG's First Overseas Bank is set to be launched in Brazil.

Brazil has been an important market for XCMG, and XCMG’s first and largest construction machinery industrial park – XCMG Brazil, was launched here. XCMG Brazil has been the hub for XCMG to reach out to the rest of South America and thrives to be the benchmark of XCMG's international development. In 2019, XCMG’s first overseas bank, Banco XCMG S.A., is set to open in Pouso Alegre, Brazil. The initial investment will be around 7.7 million USD, and Mr. Wang Min, Chairman of XCMG Group states that the company plans to invest 0.3 billion USD in the next 5 years. XCMG Group also aims to expand its local factory in MG to transform it into an industrial park. 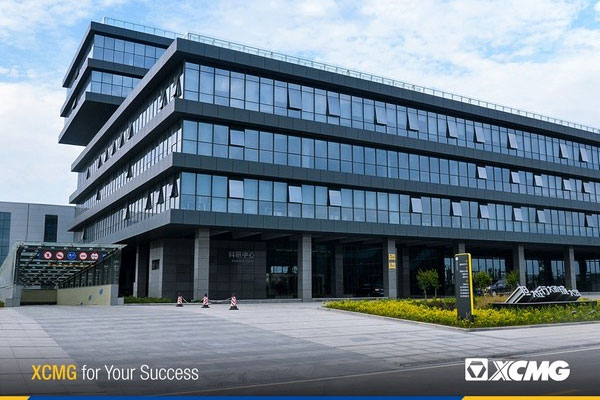 As the high-end equipment manufacturing industries are showing new vitality in the digital age, XCMG has embraced changes and led transformations to the intelligent era.

8.Deepening reform across the board 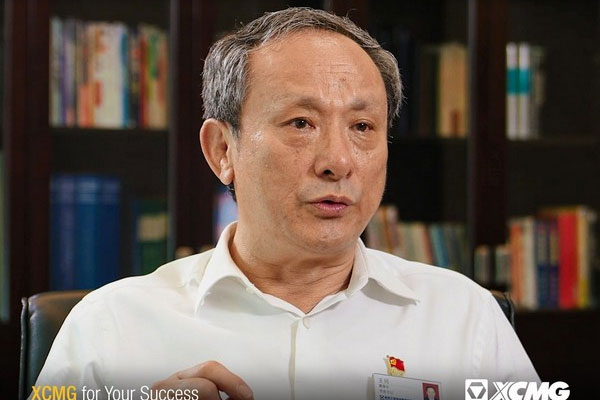 XCMG is taking an "Advanced and Endurable" development path that's deeply rooted in innovation and sustainability to lead the industry towards a green, intelligent future.

Eyes on the international market, XCMG has been integrating international corporate standards and developing strategy with its core value. In 2019, solid progress has been made in the company’s mixed-ownership reform. Mr. Wang Min, chairman of XCMG Group, said that XCMG aims to become a world-class company with great leadership, solid foundation, systematic strategy, unique company culture, creative institutional dynamism and modern enterprise management. This corporate reform is an essential step to remove institutional barriers, thus steadily boosting the development. 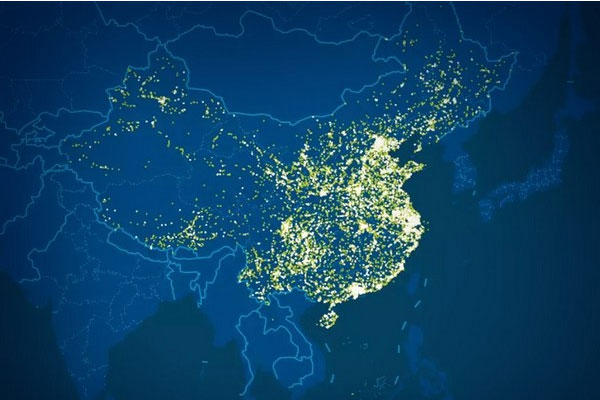 The China General Office of the National Development and Reform Commission listed XCMG as Excellent Technology Center in the 2019 Technology Center Review. XCMG ranked 48 nationwide, top in the construction machinery industry. XCMG is fully committed to its technological innovation strategy and has been the pioneer of the field domestically. In 2019, XCMG continues to build a strategic intelligent manufacture network across the nation, 3 new manufacture foundations were launched and put into operation. XCMG has set up technology center in countries including Germany, US, India and Brazil. 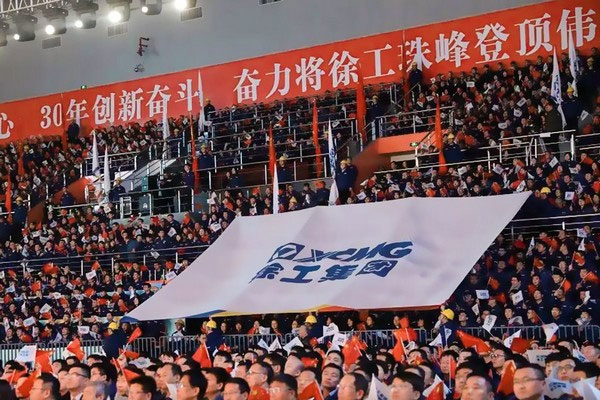 December 12th, 2019, marks the 30th anniversary of the foundation of XCMG Group and its 76 years history. To commemorate this historical moment, XCMG held the "Climb Mount Everest" Pledging Ceremony. The past 30 years have witnessed a remarkable journey of exploration, reformation and innovation. During the ceremony, XCMGers reflected upon the past and looked forward to the future. This 30-year memory belongs to all the XCMGers and will continue to motivate us on the way to mount the Everest!