On March 25th, Weichai was proud to announce that the 20,000-hydrogen fuel cell engine plant was officially put into operation. The launch of the plant demonstrates that Weichai has taken a step closer towards commercialization of hydrogen fuel cell and helped develop a "green power hydrogen city" in Shandong province. 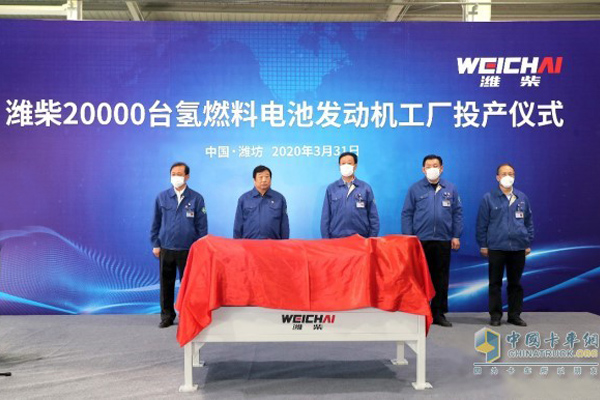 The project was officially launched in 2018 and was completed a year later, which owns a complete set of R & D test bench to conduct tests on fuel cell key materials, single cells, stacks, engines, powertrains, and finished vehicles. with a fuel cell engine and stack production line, it has been regarded as one of the largest production base for fuel cell engines with a capacity of 20,000 sets in the world.

It is reported that the hydrogen fuel cell engines rolling off today will be mass delivered to domestic bus manufacturers. Upon the completion of vehicle assembly, these buses will be put into market in Weifang for demonstration operation.

As a leader in promotion of fuel cell commercial vehicles, Weichai has successively launched more than 200 hydrogen fuel cell buses in Weifang, Liaocheng, Jining, Jinan and other regions in Shandong province. These buses have been running on seven routes covering a total travelling milage of 120,0000 kilometers. Weichai has became one of the companies with the most hydrogen fuel cell commercial vehicles on demonstration.