XCMG Signed a MOU with Vale, a World-renowned Mining Company in Brazil

XUZHOU, CHINA, October 29, 2021 /chinatrucks.com/ -- This year marks the 25th anniversary for the establishment of the friendly province-state relationship between Jiangsu Province, China and Minas Gerais State, Brazil. During the ceremony in Nanjing on October 26th, new fruitful results were achieved from the friendship and cooperation between the two world-class multinational enterprises as XCMG officially signed an MOU with Vale S.A. Brazil, a world-renowned mining company,for the potential supply of mining and infrastructure equipment,including zero-emission equipment and autonomous equipment. 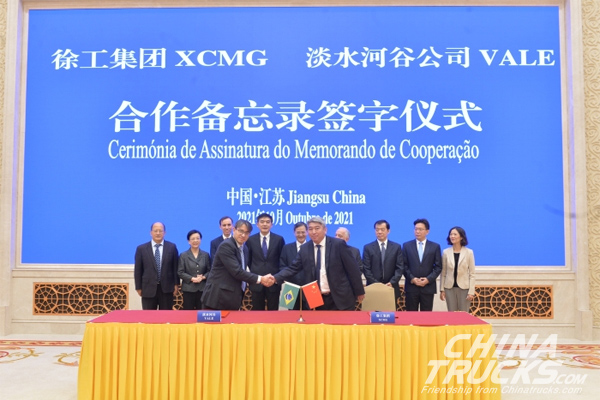 “Environmental protection is vital for human happiness and the driving force for enterprises to realize sustainable development. As a world-renowned enterprise that develops and manufactures complete sets of large-scale machinery for open-pit mining, XCMG takes green and new energy machinery as the key direction of advancement. We are also glad to see that Vale considers green development featuring low-carbon mining and net zero emissions as a critical strategic goal for its development. After signing this MOU, we will set up a special team in XCMG for deeper cooperation and communication with Vale, for joint contribution to push forward the global environmental protection, and to boost green and sustainable development in economy”,At the signing ceremony, Mr. Hansen Liu said. 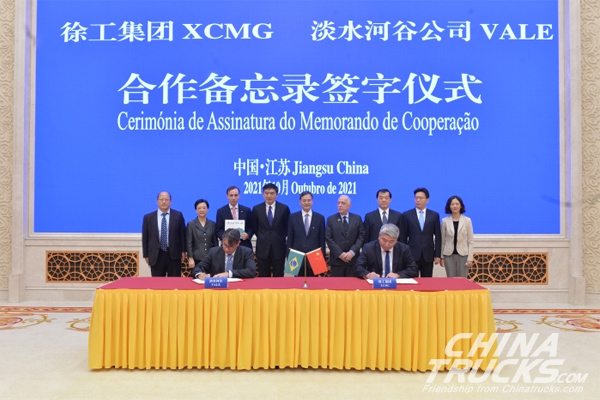 Mr. Alexandre Pereira, Vale’s Executive Vice President for Global Business Solutions congratulated this initiative. ”It is in line with Vale's goal of reducing its carbon emissions of scope 1 and 2 by 33% by 2030 and achieving net zero emissions by 2050 and reinforces our ambition to lead the road to low carbon mining. Vale also sees this partnership with XCMG Machinery as one more important step in the deepening of its long-term and win-win partnership with China, which dates back to 1973, when Vale sent its first iron ore shipment to China”, Pereira said.

“The successful signing of the MOU between XCMG and Vale means a lot to the powerful alliance between China's manufacturing industry and international partners towards the broad international market. This signing demonstrates the positive influence of our province in intensifying overseas cooperation and communication, and stabilizing foreign trade-oriented economic growth under the new development pattern of "dual circulation" in which the domestic economic cycle plays a leading role while the international economic cycle remains its extension and supplement”,Mr. Hui Jianlin said.