Geely Partners with Myongshin to Explore the South Korean Market

SOUTH KOREA, Feb 22(chinatrucks.com)--On 21 February 2022, Geely and South Korea's Myongshin signed a strategic cooperation agreement. According to the agreement, the two parties will jointly develop a customized model based on the new energy light-duty passenger vehicle FARISON Xingxiang V, and will have in-depth cooperation in fields like technology development, localization certification, as well as marketing and sales. 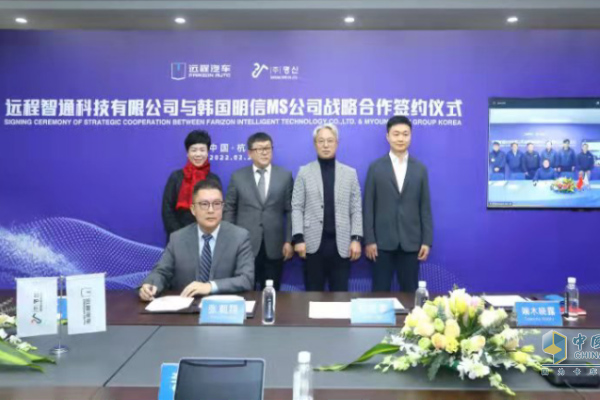 As South Korea's economy grew at a rapid pace, the pressure it exerted on energy and environmental sectors is increasing. In October 2021, South Korea announced that it had set out a policy roadmap for achieving carbon neutrality by 2050, with a focus on limiting coal and LNG use for power generation and replacing internal combustion engine vehicles with hydrogen-powered vehicles and battery-powered electric vehicles. As one of the top 10 automotive markets in the world, South Korea has seen new energy vehicle as one of the important paths to achieve carbon neutrality goal. For new energy commercial vehicles, it particularly has a broad space for development.

Fan Xianjun, CEO of Geely Commercial Vehicle Group, said, "With this cooperation, the two parties will give full play to their respective industrial advantages and brand influence, to jointly build core products with market competitiveness. We will work together to develop and deepen the Korean electric commercial vehicle market on the principle of equality and mutual benefit, and explore the expansion opportunity into other countries and regions from South Korea, thereby promoting the global promotion of new energy commercial vehicles and achieving win-win cooperation."

As a Korean auto parts provider with a history of nearly 40 years, Myungshin Group specializes in the production of auto parts and has large manufacturing facilities in Korea and Brazil, whose main partners include Daimler, Renault, Kia, Hyundai, FAW and others.

The partnership will begin with the entry of FARISON Xingxiang V model into the South Korean market. For the following three years, it aims  to achieve sales of 12,000 units of this customized model in the Korean market. After that, they will expand further to the surrounding markets based on their strengths in South Korea.