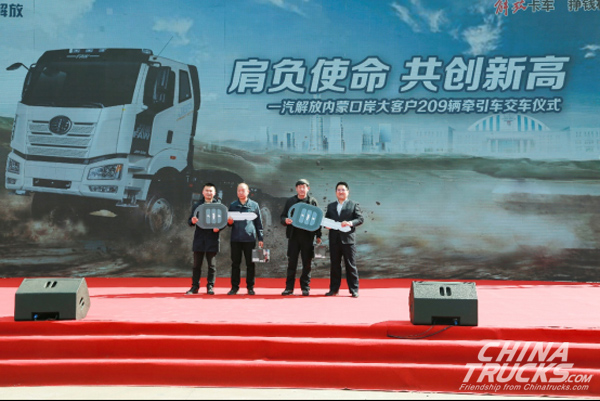 At the event, Jiefang gave a full introduction to Jiefang J6P 6X4 tractor from a technical point of view. They mentioned that its chassis system had been fully upgraded to improve efficiency and reduce maintenance costs while retaining those original advantages such as "low dead weight, low fuel consumption, high reliability, comfort and safety". Leng Changchun said, "These 209 tractors are specially developed by FAW Jiefang according to actual operating conditions to fully meet customers’ expectations.

During the event, Song Ruiqi delivered a speech to express his recognition and appreciation for Jiefang's products, and willingness to conduct in-depth collaboration in promoting green transformation of transport sector and to work jointly to create an intelligent logistics industry.

The manager of Jiefang’s Mongolia office subsequently handed over the signal keys to customers, and announced the official departure of 209 units J6P6x4 tractors.

With its layout accelerated in global market, FAW Jiefang has achieved some significant progress in overseas business. In 2021, its overseas sales exceeded 15,000 units, an increase of 142% year-on-year. The growth rate was among the highest in the industry and its export of medium and heavy trucks moved up into the top three last year.