Rebounding of Tractor Market in the First Half Year 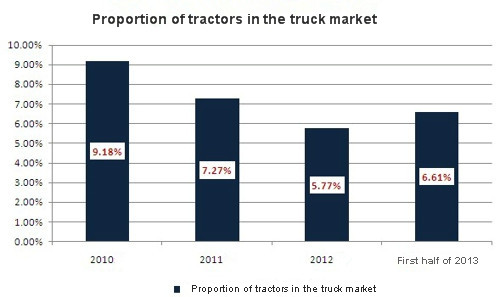 Since the peak time in 2010, heavy trucks have been suffering a decreasing sale with no exception of tractors. Tractor market sees a decrease not only in sales, but also its proportion in complete truck market: from 9.18% in 2010, to 7.27% in 2011 and then to only 5.77% in 2012. The reason for this might be people swarmed to buy vehicles when the complete vehicle market is flourishing in 2010 and many of the people buy vehicles in advance in case of future use.

Such a declining proportion, however, stops in the first half of 2013. In the past 6 months, the sales volume of tractors increases dramatically and its proportion in the whole truck market rebounds to 6.61%. Insiders believe that on one hand, most tractors users plan to change their vehicles after three years, and on the other hand, many new tractors are open to the market which stimulates procurement needs.

Seen from loading capacity, according to statistics of CAAM, the leading tractor remains the one with 25 tons to 40 tons in the first half year, totaling 96750 units sold and accounting for 79.15% in tractor market. Yet seen from the whole trend, the proportion of such a type is declining and larger tons tractors are increasing. 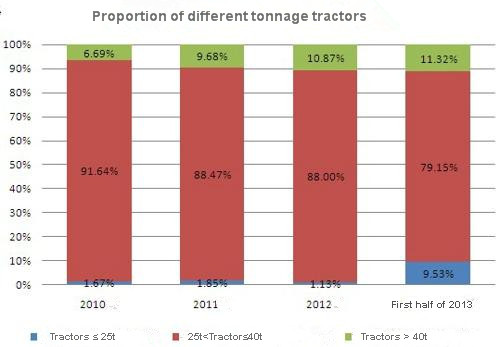 According to the market share trending chart over recent years, FAW Jiefang, Dongfeng, Foton, SHACMAN and SINOTRUK are five giants in this industry, taking up around 90% of the market all together. 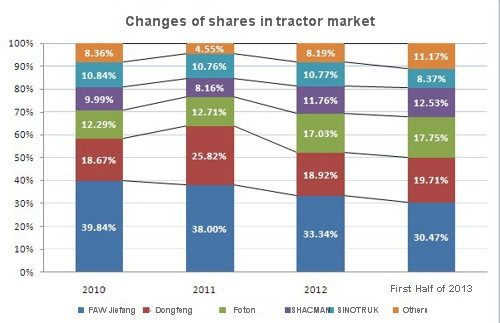 To be specific, the five giants have quite different market performance due to product structures.

Tractor has been FAW Jiefang’s strength. Over recent years, however, its market share decreases from 39.84% in 2010 to 30.47% in this first half year. The reason for this is its slowdown in updating new products. Except a new product J6 launched in 2007, it doesn’t have any new product come out. New Hanwei or new Dawei are mainly upgraded one of previous products. Shortage of new products makes it loss many users.

Distinguished from Jiefang, Dongfeng Commercial Vehicle focuses on creating some influential types through narrowing down product types. The most attractive ones are Dongfeng Tianlong and Tianjin. Even the launch time is in 2006 earlier than Jiefang J6, Dongfeng chooses better motors than Jiefang. Its commercial vehicles could install Yuchai motors and are optional for Dongfeng Commins and Renault. Jiefang, by contrast, only choose Chinese made motors. Hence, Dongfeng has been maintaining a market share around 20% these years in tractor market.

Foton, an uprising star in heavy truck market, accelerates its pace in tractor market. In 2010, its market share is only 12.29% but in the first half year the share rises to 17.75%. If we analyze Foton’s tractor we could easily find that Foton has similar choice with Dongfeng. According to a market investigation, Foton Oman’s motors are mainly Weichai and Commins. After cooperation with Benz, their joint-venture product Oman GTL has much improvement in driving room compared with previous Oman ETX even there is no tractor with Benz motors open to the public. Insiders believe the join of Benz will help Oman attract those logistic companies that attach importance to outside image.

SHACMAN has been maintaining a steady growing market share, from 9.99% in 2010 to 12.53% in the first half of 2013. SHACMAN chooses Weichai and Commins motors. With respect to vehicle type, SHACMAN has Aolong, Delong M3000 and Delong F3000 tractors. Particularly, as the LNG tractor is hot in the market, Delong LNG tractor is SHACMAN’s important product in tractor market.

SINOTRUK has been posed itself as a HD truck manufacturer. Over recent years, with stricter requirement on over-load and beyond-limit, light weigh tractor becomes a hot product. To enlarge its tractor market, SINOTRUK has to work on light weigh tractor by adopting American Hendrickson rubber suspension, localized MAN axle and so on. Seeing from data, SINOTRUK has maintains a market share around 10% for 3 consecutive years but the figure goes down to 8.37% in this first half year. According to a market investigation, SINOTRUK’s new TH7 and T5G are only sold in some areas, and T5G is under short supply. It is said SINOTRUK has extreme harsh requirement on quality of T5G, therefore, many users have to wait about 3 months to get the vehicle. We still need to wait and see the market performance next year to say whether SINOTRUK could reverse the declining situation.