Analysis and Prediction on Light Truck Market in Q2 2013

www.chinatrucks.com: In the first half 2013, Chinese commercial vehicle market remains to maintain a slow rising status despite of many negative factors such as slowdown of Chinese economic development, upgrading of emission standard, driving limits of trucks, elimination of yellow label cars (referring to vehicles emitting highly polluted gas), updates of vehicles bought before 2010, release of some oppressive market, transportation market improvement and rectification.

The truck market in the first half year presents a “two highs and two lows” trend in terms of sales. The sales volume of heavy and medium truck grows higher than that of the whole truck market, and light and micro truck increases lower than the whole market. With respect to market share, the light truck remain takes up half of the market, but decreasing by 0.42% year on year; while heavy and medium trucks all sees a 0.5% increase in market share over last year (see table 1). 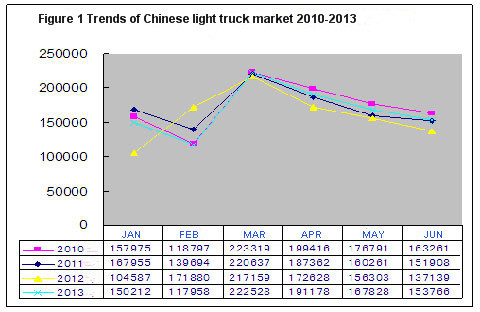 Reviewing the sales in Q2 in the past 4 years, in Q2 2010, the sales volume of light truck reaches a new high, totaling 530,000 units thanks to favorable policies such as implementation of fuel oil tax, rise of purchase tax, extension of duration of Rural Car Purchase Subsidy Program, subsidy of old for new, etc. (see figure 2). 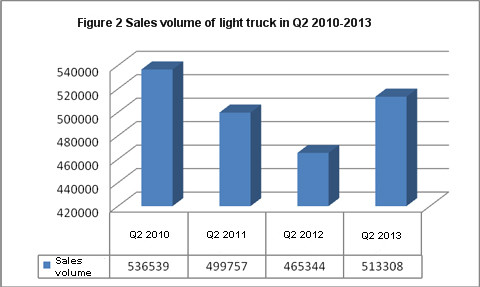 In Q2 2012, the sales volume of light truck again sees a dramatic fall, 30,000 units fewer than Q2 2011. This is because China encounters challenges both at home and abroad. Internationally, the periphery economy is weak due to European debts crisis, frictions with surrounding countries never stops and the dispute on South China Sea is intensified. In domestic market, investment, trade and consumption suffer slowdown. 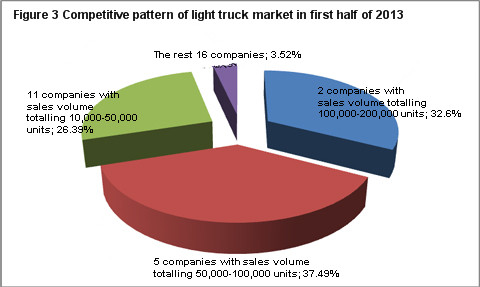 In the second quarter of 2013, the light truck market presents following characteristics:

1. The total sales volumes in Q2 and first half year both increase, but the growth rate lower than heavy and medium trucks in the same periods.

4. The launch of new products is slower than Q2 2012 and Q1 2013. According to incomplete statistiscs, in Q2, only JAC launches new product Weiling II and Weiling 1061 on May 16. The two new types, besides upgrading back axle, power, transmission and tyre based on previous type of the same kind, increase the maximum speed to 122km/h and 115km/h. In Q1 2013, there are 11 types of new products open to service and in Q2, there are 8.

Ⅳ. Expectation in the second half year

1. The overall economy is likely going downward. On July 9, on a forum regarding economical situations in some provinces held in Guangxi, Premier Li Keqiang stresses that the macro control, standing from the present and bearing future in mind, should make economical operation in a rational scope—economic growth rate, employment rate, and the margin of price rise should be confined within limits. This indicates a rapid economic growth in the second half year is out of hope.

2. Emission standard is upgraded. In political level, on June 14, at the executive meeting of the State Council, ten measures to prevent air pollution are passed. Locally, from July 1, some cities begin to implement China Ⅳ for diesel vehicles. Many cities accelerate the speed to eliminate “yellow label car” (referring to highly polluted vehicles) and driving limits on trucks. As diesel light trucks save almost half of fuel than gasoline vehicles, 99% light trucks are diesel ones. The implementation of China Ⅳ standard in the second half year will exert direct impact on the sales of light trucks.

Detailed information about implementation of China Ⅳ for diesel vehicles:

Northeast (including Heilongjiang province, Jilin province and Liaoning province): only Harbin carries out the standard for heavy gasoline and diesel vehicles with gross mass over 3.5t.

Southweast (including Sichuan, Yunnan, Guizhou, Chongqing and Tibet): among 60 cities, only 3 cities implement the standard, namely Chengdu, Meishan and Yaan.

According to incomplete statistics, only 9 cities could supply China Ⅳ-compliant diesel, namely Beijing, Shanghai, Guangzhou, Foshan, Zhongshan, Shenzhen, Dongwan, Huizhou and Chengdu. According to “Vehicle Diesel Ⅳ”GB19147-2013 issued by General Administration of Quality Supervision and Standardization Administration, sulphur content should be less than 50ppm in the Ⅳ stage till December 31, 2014. However, the supply of 350ppm (China Ⅲ standard) is commenced on July 1, 2013.

Supply of Adblue: according to the notice of Standardization Administration—Diesel Motor Nitrogen Oxides Reductant—Adblue (AUS32) is officially implemented on July 1.

The above indicates that the implementation of China Ⅳ brings a lot of trouble to vehicle manufacturers and user.

3. The shortage of money affects not only the development of micro and small companies but also vehicle loans. Even the state council formulated the guidance on financial support for economic structure adjustment and transformation upgrading, it is implemented at the end of the year, thus it will not have too much influence.

4. July, August and September are off seasons for commercial vehicles. There is no exception for this year. Therefore, there are only three month left to see actual sales.

5. Foreign trade is severe affected by various reasons. First of all, the external market remains depressed, limiting the export of vehicles. Secondly, exchange rate, labor and export costs continue to rise, making it harder for exporting. Thirdly, as the trade friction happens frequently in various ways, China’s trade environment is taking a turn for the worse. Last but not least, industrial production in China slows down, hindering the demands for imports of raw materials.