Analysis and Anticipation on Chinese Medium Truck Market in Q3 2013

1. Analysis on production and sales in first three quarters

In the above rankings, medium truck always stays at the last position.

In the third quarter, due to high temperature and the demand for cooling, the usage of electricity increases dramatically. The transportation for cold chain product rises as well. The sales volume of medium trucks (including chassis) hits a historical high (see Chart 1) thanks to many favorable factors such as the upgrading of urban environment protection, state and local regulation on much trucks and logistic market, reconstruction of drought and waterlog areas, and increase of investment in infrastructure. In the same way, Chinese medium truck chassis also witnesses a new high compared with the same period in the past four years (see Chart 2). 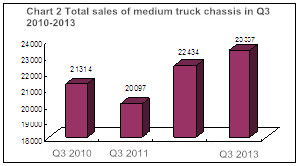 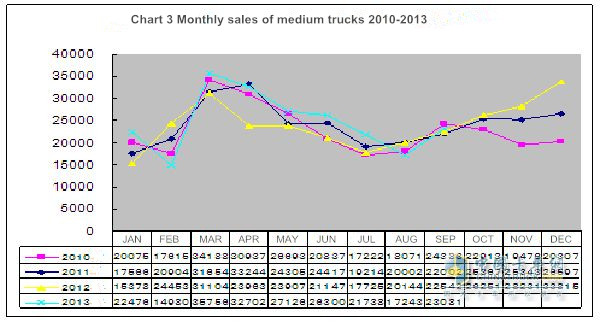 1) Analysis in the first three quarters

From January to September, 2013, the data from CAMA shows there are 19 enterprises producing medium trucks, 1 enterprise less than the same period of last year and Tri-Ring Hanyang Special Vehicle quitted this market (see Table 2).

After one year quiet adjustment, Sinotruk ushers in rapid development with the increasingly mature production base for medium trucks in Chengdu, Haixi and Shandong thanks to the improvement of technology, market, product and network of its medium truck products. It sells 24792 units, up by 52.14% year on year with a market share of 11.18%, 3.08 percentage points higher than Q3 of last year.

Jinbei sells 12830 units with a market share of 5.78% and 200.26% growth rate year on year. The market share is 3.66 percent higher than that in the same period of last year. JAC, after completing product integration and technological upgrade, also welcomes a rapid increase by selling 12320 units with a year-on-year growth of 20%. Foton Ollin has been raising attention on medium truck market since the beginning of 2013 by integrating and upgrading products in Foton headquarters and launching new products. Finally its medium truck product grows by 98.31% to 9245 units with market share 2 percents higher.

Table 2 Sales of medium trucks (including chassis) of Chinese manufacturers from January to September (Unit, %)

In terms of ranking, besides Jinbei and Qingling shift their rank, the rest manufacturers maintain the position with that in the first three quarters.

Since the beginning of 2013, the market has been presenting the following characteristics:

1) Market demands continue to grow. In the third quarter, the sales of medium truck (including chassis) and medium truck chassis both hit a high over the past four year.

2. Dongfeng and FAW continue to steer the market direction. Their positions in medium truck chassis market remain unshakable but their competitiveness is shrinking in the complete medium truck segment. In the same way, Qingling and FAW Jiefang also witness an increasingly weak competitiveness. On the contrary, thanks to constant integration and improvement in products, marketing and network as well as launching of new high-level products, JAC, Sinotruk and Foton are seeing a more and more competitive strength. Jinbei also increases competitiveness.

3) The launching of new products is slowing down, but the new high-level products come out one after another. Since the beginning, five enterprises (Foton, Sichuan Hyundai, Tangjun Ouling, FAW and Sinotruk) in succession launch 7 series of new products, 4 of them are high-level ones. To name a few, Auplead medium truck launched by Dayun on March 29; Aumark 5 launched by Foton on March 31; Foton Rowo (Cummins engine) rolled out in Beijing on September 11; MIGHTY launched by Sichuan Hyundai at Chengdu Century International Convention Center from August 30 to September 8; T6 by Tangjun Ouling released at the beginning of 2013; FAW Jiefang Qingdao Long V rolled out in Beijing on September 23; New Yellow River delivered by Sinotruk to users on June 8.

Looking into the whole market, the total production will reach 89,000 units in Q4, leveling off with the same period of last year. The total sales in the whole year will be 310,000 units, up by 7% or so year on year.

The main factors affecting the medium truck market in Q4 are mainly as follows except for economic recovery.

Firstly, based on the policies launched, the urban environmental protection will be accelerated in 2013 and key cities will speed up upgrading of high-emission vehicles in Q4.

Secondly, the year-end performance appraisal on local governments is counted down by the end of the year. Many local governments especially those of key cities will increase monitor and regulation on muck trucks and overrun vehicles, thus raising new demands for transportation vehicles.

Thirdly, as the urbanization construction goes forward, the city building in some mountainous areas will bring more needs.

Fourthly, post-disaster reconstruction will also brings in more demands because of draughts, waterlogging, typhoon and other disasters in some areas in the second half year.

Fifthly, the transportation of vegetables from south to north will contribute to the increasing demands for trucks.

Sixthly, the backward production elimination comes to a key stage in Q4. The shutdown of enterprises related to industries of iron & steel, cement, non-ferrous, petrochemical, mechanical, building materials, textile and light chemical will affect the freight volume in these industries.

Seventhly, with the end of national wide 6-month unlawful acts of trucks, the transportation market is full of vitality again.

Eighthly, in responding to China Ⅳ emission standard, the presale of China 3 trucks before June is basically finished in September. Entering October, the implementation of China Ⅳ in most cities will definitely affect the sales of new trucks.