www.chinatrucks.com: 2016 is coming to the end. The good performance of heavy trucks market in the past ten months has made the heavy trucks pattern become clear in 2016. What new changes happened in the top 10 heavy truck manufacturers?

As a whole, top 5 heavy trucks enterprises are still capturing market but the market shares are going downturn. We can also say that the market has been "robbed". 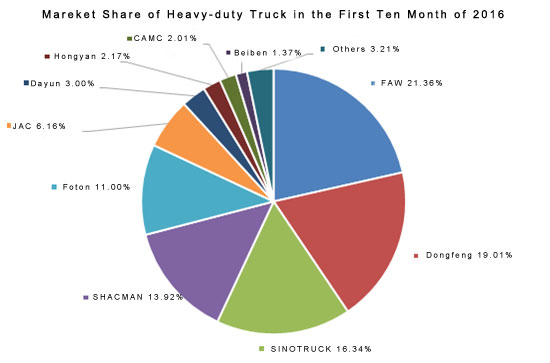 The first-class, FAW Jiefang is successful to the throne, the market shares of DONGFENG, SINOTRUK, SHACMAN and FOTON are shrinking.

Compared to the top 5 sales change, only Jiefang with sales growth of 72.6% has a rapid increment speed far more than the whole-industry growth of 24.6%. And its amount sales reached 121 thousand units to make huge contribution to the heavy trucks market in the past ten months. 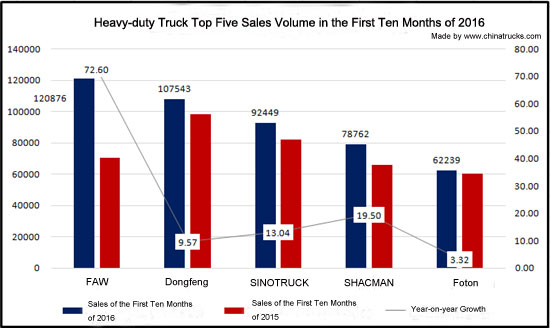 The other four manufacturers also had a good performance. SINOTRUK and SHACMAN sales accumulated a large increase of 13% and 19.5%, while DONGFENG and FOTON increased by 9.6% and 3.2% respectively in the first ten months of 2016. 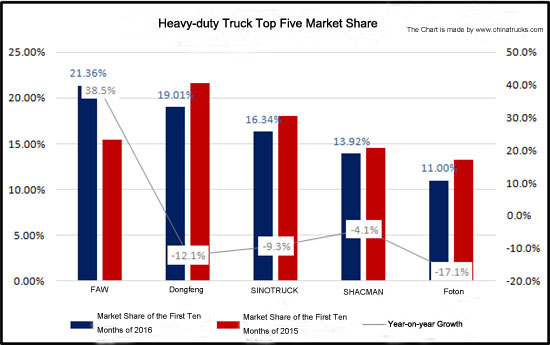 Another point is worth to mentioning that Jiefang outnumber Dongfeng to become the sales champion, and DONGFENG ranked the second. There are no changes in the ranking of other manufacturers.

The second-class: Hongyan had a good performance, CAMC followed by it.

In the second-class, Hongyan has the biggest change that rose two places into the 8th place. From Jan. to Oct., Hongyan totally delivered 12 thousand trucks, taking market share of 2.2%, and the sales accumulative growth is up by 68.9% year on year.

Beside the Hongyan, the sales growth of JAC and Dayun of the first ten months were also higher than the growth of the overall industry, up by 35.1% and 35.7%. Especially, the JAC sales increased almost ten thousands units expecting to over forty thousands vehicles. 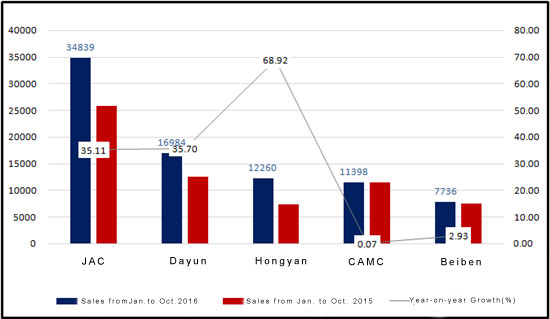 The other manufacturers: XGMC and CHMC had rapid increase

Beside the top 10 sales of heavy truck companies, there are other two companies, XGMC and CHMC, performing remarkably.

XGMC has sold 7185 trucks for the first ten months, 500 trucks less than Beiben who is ranked 10th, increasing as high as 70.1%. Especially, the sale of XGMC comes into the top 10. It’s still a doubt whether the XGMC can rank into 10th in the end of this year.

The CHMC started selling the heavy trunks in the middle of 2015, nevertheless its performance of the first ten months in 2016 was remarkable,1303 vehicles(only 20 vehicles less than the HINO),up by 189.6% explosively year on year.