Date:2017-03-15 Source:www.chinatrucks.com
www.chinatrucks.com: According to the latest production and sales news from China Association of Automobile Manufactures, in February 2017, 56,042 semi-tractors are sold, slightly decreasing by 0.19% and 234.36 % jump year-on-year, and the growth rate is bigger than that of last month (+221.65%). The tractor market continues to be booming in early 2017, with sales rising over 200% in the first two months.
Sales of top ten enterprises sold 55,450 vehicles in total, amounting to 98.94% of total sales volume in semi-tractors segment in February. No.1 FAW Jiefang takes up 31.16% in the semi-tractor market, with a significant share of the market. Considering from the monthly growth rate, the tractor market is still hot in February. The growth rate of all enterprises are all higher than 100%, five of which are over 200%. CAMC and SINOTRUK even saw over 300% jump, reaching 360.61% and 328.30% respectively. (Note: JAC’s data of last year has not been reported to China Association of Automobile Manufactures, so there is no relative analysis.) 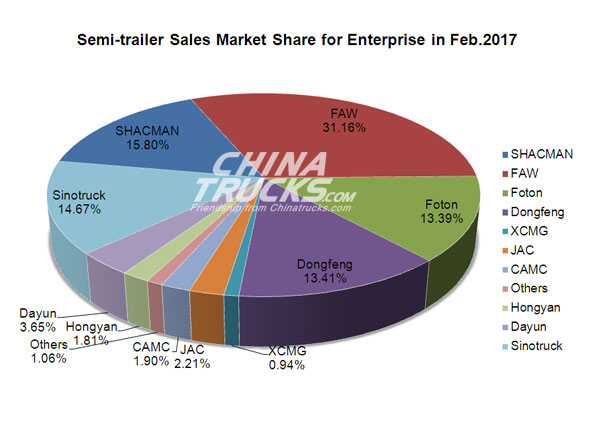 The continuous sales rise makes the cumulative sales in 2017 very nice. During January and February of 2017, 112,189 semi-tractors are sold in Chinese market, 78,117 units more than that of last January and February, and the year-on-year growth rate is up to 229.27%. Sales volumes of enterprises that ranked top ten in February are all rising greatly, and even Foton’s volume, with the smallest growth rate, has increased by 114.11%. 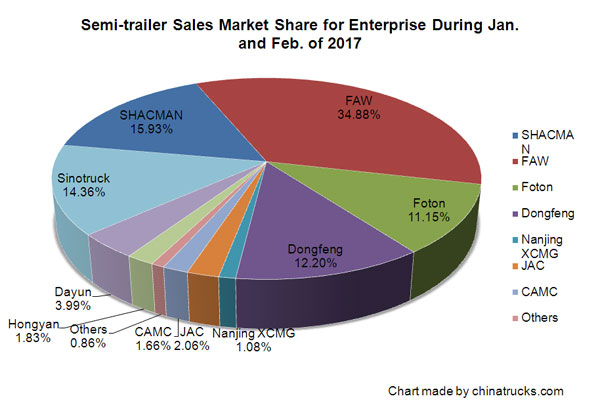