In the same month, the sales volume of heavy-duty trucks in China stood at 99,000 units, down by 9.9% year on year. With a monthly sales volume of 33,000 units, FAW Group ranked the first place. With a 2.3% decline in its sales, the company saw its market share up by 2.7 percentage points. CNHTC, Dongfeng and Shanqi Group ranked the second, the third and the fourth place. The three company all witnessed some downward movements in their sales. Hualing, in sharp contrast, saw its sales jump by 50.7% year on year. 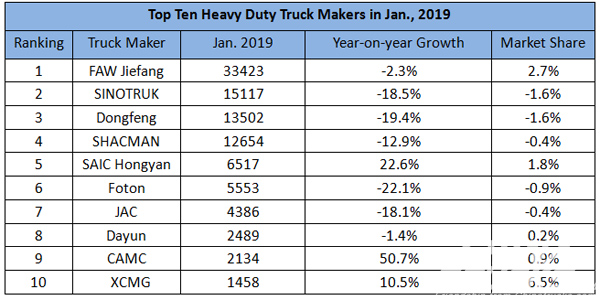 In January, China sold 11,000 units medium-sized trucks, down by 27.8% year on year. With a monthly sales volume of 2,605 units, Foton saw both its sales and market shares rise sharply. Qingling, Dongfeng, Dayun Automobile, CNHTC and JAC all achieved a sales volume of over 1,000 units. In addition, the monthly sales of both Dongfeng and Feidie Automobile dropped by over 50%.

In January, China’s sales volume of light trucks registered at 152,000 units, up by 3.1% year on year. JAC and Foton ranked the first and second place respectively with their sales both approaching 25,000 units. Dongfeng, Chang’an and CNHTC all had their monthly surpass 10,000 units. FAW saw its sales jump by 54.5% year on year while JMC witnessed a sharp decrease in its monthly sales.