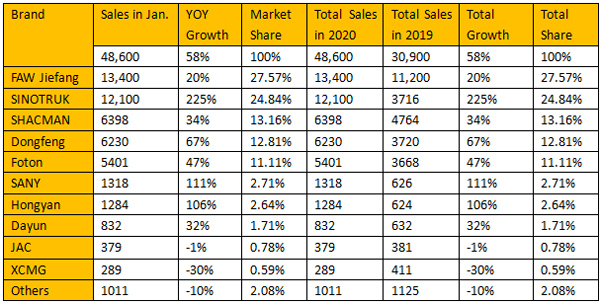 All top ten players in the market recorded two-digit growth rate. Among them, Dongfeng and Beiben witnessed growth rates of over 100%.

Dongfeng sold 12,200 units tractor trucks, up by 137% year on year, making its way from the fourth place in 2020 to the second place. Beiben edged its way to the top ten players in the industry and took the leading position in the industry by seeing an explosive growth rate of 346% in January.

XCMG ranked the third place in the industry in terms of its growth rate which stood at 96%. SAIC Hongyan sold 2,980 units tractor trucks, up by 93% year on year. Its growth rate ranked the fourth place among those of all players.

Foton and JAC, which ranked the fourth and the eight place in the industry in terms of their monthly sales volume in January, both recorded better growth than the market average growth rate of 34%.