China’s truck sales in July stood at 274,400 units, down by 34% versus the same month last year. The decline was faster than the 10-percent drop posted for May, and the 20-percent drop for June, according to the latest data. 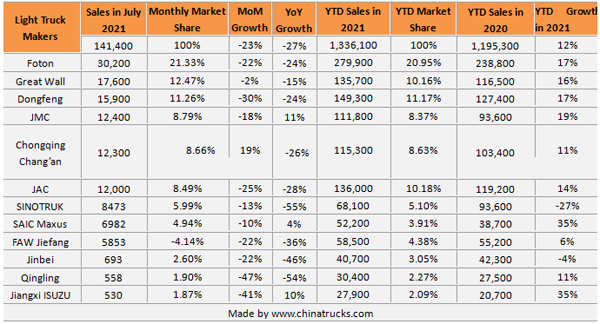 Light-duty truck sales reached 141,400 units in July, 2021, down by 27% versus the corresponding period of the previous year. The decline rate was much faster than that of 8%-drop in May and 23%-drop in June.

Six truck makers, namely Foton, Great Wall, Dongfeng, JMC,Chongqing Chang'an, JAC, saw its July new light truck sales surpassing 10 thousand units. The combined sales volume of the top ten players accounted for 88.68% of the total market share of the industry while that of the top five players dominate 62.52% market share. Foton, Great Wall and Dongfeng are the truck makers in the top three, with market share of up to 21.33%, 12.47%, and 11.26% respectively. The fourth to the sixth place go to JMC, Chongqing Chan’an and JAC with a market share greater than 8 percent. 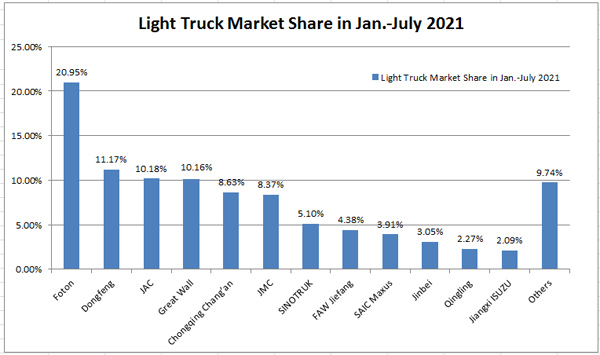 Eight out of ten top players in July reported a negative growth in sales, mostly had been dropping for three months in a row. SAIC Maxus and JMC are the only two players who saw its sales grow in the month of July.

Greeat Wall has been moving up all the way from its ranking in fourth place in April, to hold on to its ranking of third place in May and June and then to rank in the second place currently.

For the first seven months, there are six players in the market recording a sales volume of over 10,000 units. Foton Motor, ranking the first place in the market, had a share of 20.95%. Dongfeng, JAC and Great Wall are the other three plays with a market share of 10% with their Jan.-July total sales volume reaching 149,300 units, 136,000 units and 135,700 units respectively.