BEIJING, August 23 –China’s domestic tractor market saw its sales drop 48% from the same month a year earlier to 35,500 units, which is 32,600 units less than that of last year. For the first seven months of the year, China's tractor sales have jumped 13% to 504,600 units. The increase was slower than the 24-percent increase posted for the first half of 2021.

China’s Tractor head sales fell in July, with mostly seeing a double-digit decline in its home market of China. Five truck makers, namely SINOTRUK, SANY, CAMC, Dayun, JAC experienced a greater than industry average drop (-48%) in sales. However, XCMG had the largest increase of 20% with a sales volume of 556 units. As it presented, there is no player in the top ten recording a July sales of more than 10,000 units. 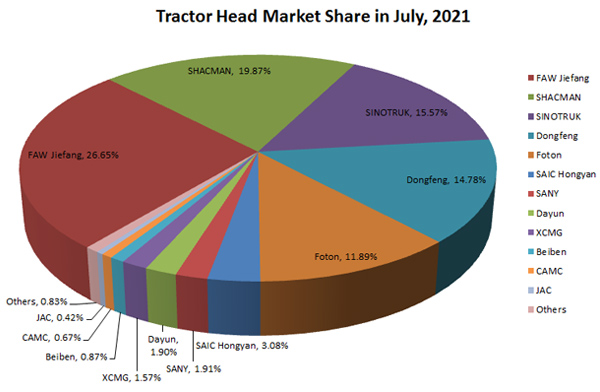 The combined sales volume of the top ten players accounted for 97.21% of the market while that of the top five players dominate 88.76% of the market. FAW Jiefang and SHACMAN are the truck makers in the top two, with a market share of up to 26.65%, and 19.87% respectively.

For the first seven months of the year, China's tractor sales have jumped 13% to 504,600 units. The increase rate was slower than the 24-percent increase posted for the first half of 2021.