SHACMAN Tops the List of the Dumper Sales in July


SHACMAN Tops the List of the Dumper Sales in July 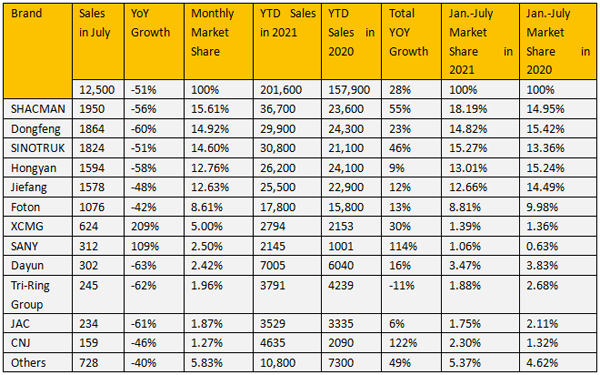 Eight out of ten top ten players in July reported a negative growth in sales. XCMG and SANY are the only two players who saw its sales grow in the month of July, up by 209% and 109% respectively versus the same month last year. 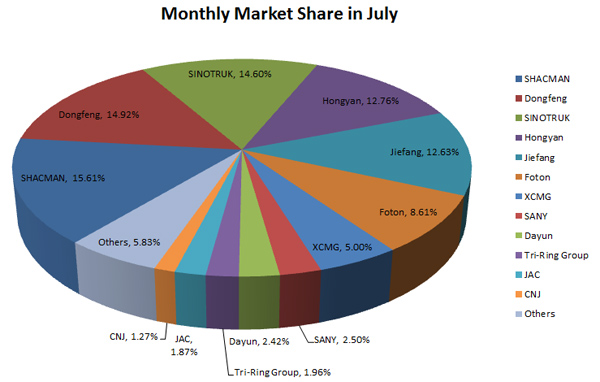 In July, there are six players in the market recording a sales volume of over 1,000 units. SHACMAN ranked the first place among all players with its sales volume reaching 1950 units in July.

From January to July, there are six top players recording a sales volume of over 10000 units, with the combined sales of top five exceeding 25000 units. SHACMAN ranked the first with sales of 36700 units, which is followed by SINOTRUK with sales of 30800 units. For the first seven months of the year, most dumper makers have posted a double-digit growth in sales, the year-to-date sales for SHACMAN, with the highest year-on-year growth of 55%, totaled more than 36700 dumpers, which is 13000 more than that of same period last year. Year-to-date Sales of sinotruk were up 46% as compared to the same period last year, SANY and CNJ recorded an increase of 114% and 122% respectivley.