China reported an overall 117.0% increase in truck exports to 270,955 units for the first nine months of 2021, which is 118.6 percent higher than the overall truck market, according to data released by the customs agency.

Let’s look back over the past five years for total export volume and YoY Growth as below.

As can be seen, it covers the years 2016 to 2021 and shows that China’s truck export has continued to retain at a high level. The cumulative export value of trucks, from January to September, exceeded $4271.4 million, a year-on-year increase of 142%. This year’s exports are not just the highest in value, but it is the largest by volume.

Also notable, Chinese truck overseas market from January to September this year saw a significant rise in export value, a 142% increase from last year, which was roughly 25 percent higher than the growth in export volume with a YoY growth of 117%. The result also shows that the quality level of trucks exported abroad has improved significantly, allowing for the possibility of more profit.

Light-duty trucks are among the segment with the fastest growth and largest proportion.

Export proportions of each segment by tonnes during Jan.-Sep. 2021 are shown as below. 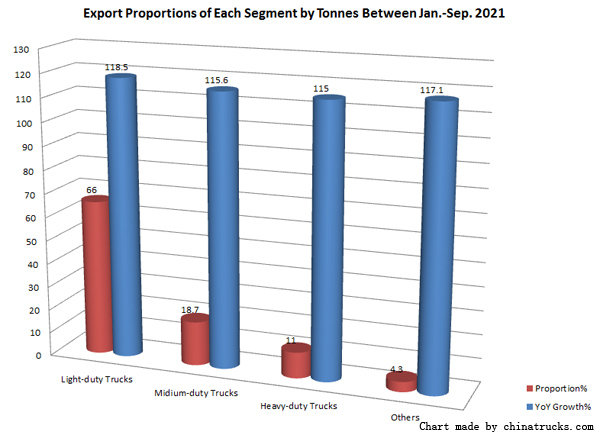 As we can see from the chart above, 178,800 Light-duty trucks were exported with an increase of 118.5 percent year-on-year. Light-duty truck has the largest proportion and growth rate in export market for Chinese trucks. 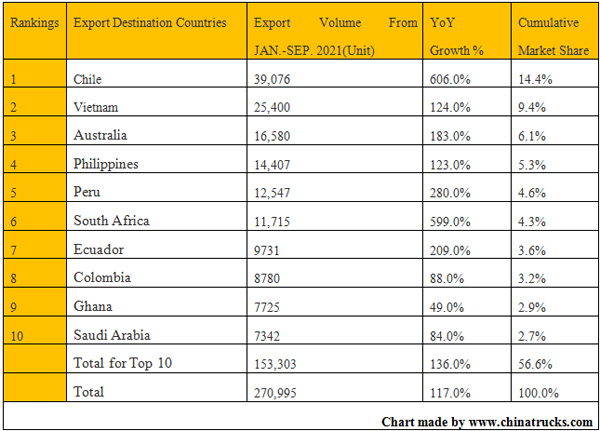 In terms of export volume, Chile not just saw the most significant increase year-on-year but it is the largest by volume. During the January to September period, Chinese truck sales in Chile jumped by 606% year-on-year to a record 40,000 units despite the pandemic, staying far ahead of its next two markets, Vietnam on 25400 and Austrilia with 16580.Top ten Chinese truck export destinations are Chile, Vietnam, Australia, Philippines, Peru, South Africa, Ecuador, Colombia, Ghana, and Saudi Arabia.

Vietnam comes second with sales of 25400 units, which translates into a market share of 9.4%, an increase of 124%, the largest among Asian market.

The export to the rest fourth to tenth destination countries on the list all reported less than 15000 units in volume, including Philippines and Saudi Arabia in Asia, Peru, Ecuador and Colombia in Latin America, as well as Ghana and South America in Africa.