Table: China's truck exports and year-on-year growth over the past decade (Based on customs export data)

Table: Comparison between exports and overall truck market (based on customs and CAAM data)

As can be seen from the above two tables, the cumulative export volume of trucks in 2021 reached 367,782 units, a record high in the past 10 years. The decade’s highest year-on-year increase (88%) was also recorded for the year 2021, which serves as a vital force for stemming the decline of overall truck market (-8.5%).

What is the reason for its strong performance?

Firstly, the epidemic has taken a turn for the better in some countries and the road logistics market and infrastructure projects have resumed, bringing back demand for trucks.

Secondly, China trucks, notably light trucks, have already been favored by customers from Chile in South America, Vietnam in Asia and Australia in Australia and other exporting countries, for their uncompromising quality and affordable price.

Light trucks account for almost two-thirds of exports, followed by heavy-duty trucks and then medium-duty trucks.

Table: Volume and share of truck exports by segment, FY 2021 (based on customs data)

As can be seen in the above chart, the share of truck exports by tonnage in 2021 is as follows.

--Trucks with a vehicle weight of less than or equal to 5 tons (mainly light-duty trucks, mini trucks can be neglected given its small number) account for nearly two-thirds (65.2%) of exports, which represents the greatest share of the export market among trucks. It indicates that the segment most in need in overseas markets was light-duty trucks. This is mainly due to a significant increase in demand for light trucks used in freight distribution.

Other types mainly refers to some special types of vehicles, has the smallest share of 4.4%.

Chile, Vietnam and Australia are the top three export destination countries, with Chile being the fastest growing market

Table: Statistics on the volume and market share of the TOP 10 export countries of China trucks (based on customs data) 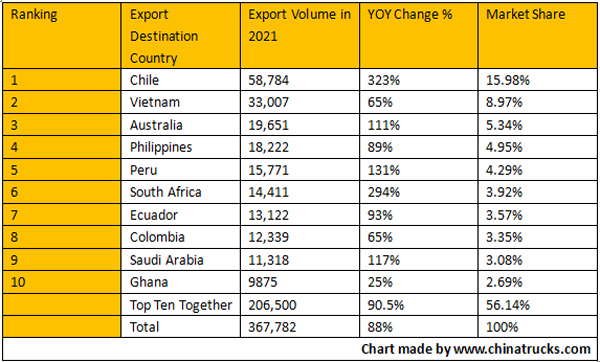 The above chart shows that in 2021, the TOP 10 export countries present the following features:

Chile is the country with the largest number of trucks imported from China, and the only one to exceed 50,000 units (a 323% jump year-on-year), with a market share of 15.98%. This is something China trucks depend on for a significant increase in FY 2021.

It is followed by Vietnam, which imported 33,007 trucks from China last year, an increase of 65% year-on-year and market share of 8.97%, and is also one of the top exporters of China trucks in Asia.

The third highest export destination country is Australia, with an export volume of 19,651 units, up 111% year-on-year, and a market share of 5.34%.

The Philippines has the fourth-largest number, with an export volume of 18,222 units, representing a year-on-year increase of 89% and a market share of 4.95%. The country is also the second largest export destination country for China trucks in Asia.

Ghana ranked in the tenth place and imported 9,875 units from China, up 25% year-on-year and accounting for 2.69% of the total.

Overall, the TOP10 export destination countries have all registered a year-on-year growth, with Chile seeing the fastest growth. The TOP10 export destination countries together accounted for a market share of 56.14%. Hence, China trucks are mainly exported to economically underdeveloped countries and regions. While in the developed European countries, China trucks still do not have a competitive advantage.

Table: Statistics on Export Share of countries along the proposed Belt and Road routes in the Last 6 Years (Based on Customs Data)

The above chart shows that in the past six years, countries along the proposed Belt and Road routes are the main markets for China's truck exports, and its proportion is increasing year by year, reaching 61.6% in 2021.