Customs data show that China’s truck exports were up 33% to nearly 100000 units in the first quarter of 2022, which is much better when compared to the overall truck market.

From the table above, it can be seen that the truck export market grew by 33% year-on-year in Q1, 2022, far beyond the overall truck market which went down by 32.8 percent. In terms of market share, the volume of exports also increased by 5.85 percentage points to 11.4% as compared to the same period last year.

Based on the customs data, significant changes have taken place in China’s truck export in recent years as below.

The YOY export growth in Q1, 2022 went far beyond the overall market, becoming a backbone for curbing the overall market downturn. As seen from the table above, China’s truck exports for the first quarter reached 99547 units with a year-on-year growth of 33 percent, the second highest over the past five years.

Among the segments exported, light-duty truck accounted for up to 70 percent of the total volume, followed by heavy-duty truck and medium-size truck. What is the reason for its strong performance?

Firstly, the epidemic has taken a turn for the better in some countries and the road logistics market and infrastructure projects have resumed, bringing back demand for trucks.

Secondly, China trucks, notably light trucks, have already been favored by customers from Chile in South America, Vietnam in Asia and Australia in Australia and other exporting countries, for their uncompromising quality and affordable price.

Quantity and proportion of each segment by tons in Q1, 2022 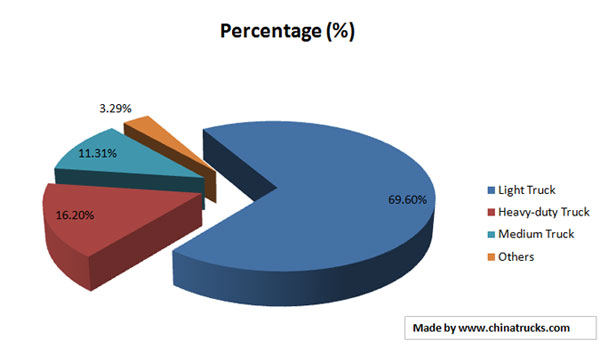 Vehicles with weight less than or equal to 5 tons accounted for the largest share of 69.6 percent. This indicated that the global demand for light-duty trucks is increasing because they are mostly used in logistics and delivery sectors.

Heavy-duty trucks (including vehicles weighing 14 tons or more) ranked the second with a market share of 16.2 percent, with the majority of the vehicles operating as long-haul road freight trucks or express trucks.

Medium trucks (vehicles weighing less than or equal to 14 tons greater than 5 tons) came to the third place, representing 11.31 percent of the exported vehicles. Most of them were used as special-purpose vehicles for logistics and sanitation vehicles.

Others mainly referred to special vehicles, which got the least share of 3.29 percent.

The majority of trucks exported are diesel-powered. 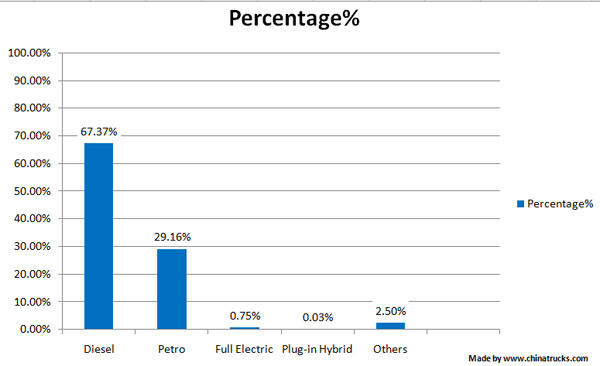 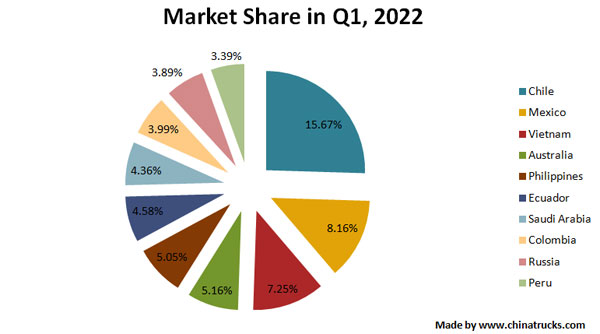 In Q1, 2022, the top ten countries and regions to which Chinese trucks were exported included:

Chile is the country with the largest number of trucks imported from China, and the only one to exceed 15000 units (a 79% jump year-on-year), with a market share of 15.57%. This is something China trucks depend on for a significant increase in Q1, 2022.

The second highest export destination country is Mexico, which imported 8126 units, with the highest increase of 648% YOY and market share of 8.16%.

Vietnam has the third-largest number, with an export volume of 7218 units, representing a year-on-year increase of 10% and a market share of 7,25%.

Australia has the fourth-largest number, with an export volume of 5138 units, representing a market share of 5.16% and down 8% YOY. This country saw the second largest year-on-year decline in the top 10 exporters (the first was Peru in Latin America, down 12%).

The Philippines has the fifth-largest number, with an export volume of 5029 units, up 23% year-on-year, and a market share of 5.05%. The country is also the second largest export destination country for China trucks in Asia.

Saudi Arabia comes to the seventh place, to which 4344 China trucks were imported, with a 97% jump year-on-year and a market share of 4.36%.

The eighth place went to Colombia, to which 3973 China trucks were imported, with 41% increase year-on-year and a market share of 3.99%.

Russia ranked in the ninth place and imported 3877 trucks from China, up 391% year-on-year and accounting for 3.89% of the total market share.

Peru ranked in the tenth place and imported 3375 units from China, up 12% year-on-year and accounting for 3.39% of the total.

Table: Statistics on Export Share of countries along the proposed Belt and Road routes in the Last 7 Years (Based on Customs Data)

From the above table, we can see that in the past seven years, countries along the proposed Belt and Road routes are the main markets for Chinese truck exports, and its proportion is increasing year by year, reaching 61.9% in Q1, 2022.