Data released by Chinese customs shows that sales of various types of trucks abroad in July went up 54%, reaching 48700 units. While In the first seven months of 2022, its combined export volume reached 269,400 units, an increase of 33% year on year, which is much better when compared to the overall truck market that suffered a 40.1% year-on-year drop.

In terms of segments, a total of 8400 heavy-duty trucks were exported in July, up 53 percent year on year, some 93.75 percentage points higher than the -40.75% growth rate of the overall heavy truck industry.

In the first seven months, a total of 47,300 heavy-duty trucks were exported, up 21 percent year on year, some 83.06 percentage points higher than the -62.06% growth rate of the heavy truck industry.

In summary, both in July and from January to July this year, exports of heavy, medium and light trucks all increased significantly year-on-year, far better than the corresponding parts in the overall market. The main reasons are:

1. Trucks are experiencing a serious contraction in demand due to market overdraft as a result of previous policy stimuli such as upgrade to EU VI emission level.

2. At present there is enough supply of trucks on the market, while the goods available for hauling are particularly few, coupled with lower transport prices, so truckers show little enthusiasm for purchase vehicles.

4. As the epidemic situation improved in some overseas countries, their logistics, transportation and engineering construction gradually returned to normal, leading to an increase in demand for trucks.

5. Chinese trucks are inexpensive and attractive to some countries that do not have strong economic purchasing power.

All in all, both the number of truck exported in July and January-July this year are at a record high for the same period in recent years.

Light truck exports accounted for 70.43% and 68.75% of the truck export market in July and from January to July,which is the segment with the largest export market share. This indicated that the global demand for light-duty trucks is increasing because they are mostly used in logistics and delivery sectors.

Heavy trucks accounted for 17.25% and 17.56% of the overall truck exports in July and January-July this year respectively. Most of the models are 6X4 tractors, which are used in the medium and long-distance road freight and medium and high-end logistics express markets.

The third largest export share went for medium trucks, which accounted for 9.65% and 10.69% of exports in July and January-July this year respectively. Most of them were 4X2 models and used as special-purpose vehicles for refrigeration, hazardous chemical transport and sanitation purposes.

Others mainly went to special vehicles, which got the least share of 2.46% and 3% in July and from January to July respectively.

In short, light truck exports accounted for about 70% of the total both in July this year and from January to July, which is the main segment of China's truck exports.

Another point worth mentioning is that pure electric models achieved net growth both in July and from January to July. It may become a new growth point with great market potential in the future.

Chile is the country with the largest number of Chinese branded trucks among the TOP 10 exporting countries. The second and third positions go to Vietnam and Mexico. 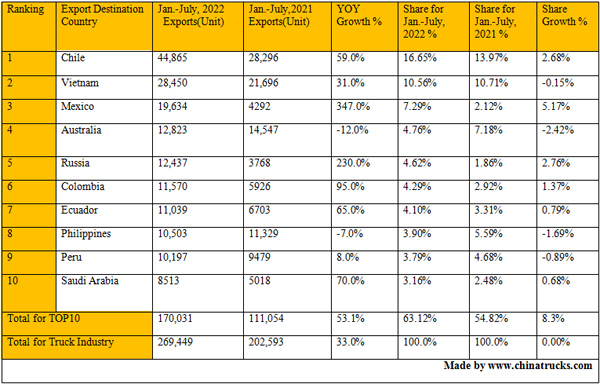 Chile is the country with the largest number of Chinese branded trucks among the TOP 10 exporting countries. In the first seven months of 2022, the number of trucks exported to Chile reached 45000 units, up 59% year-on-year, with a market share of 16.65%. This is something China trucks rely on for a significant increase in Jan.-July, 2022. 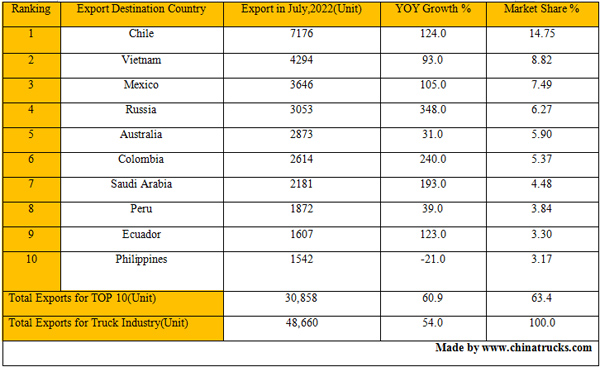 The second highest export destination country is Vietnam, to which China exported 28450 units, up 31% year-on-year, with a market share of 10.56% in January to July 2022. 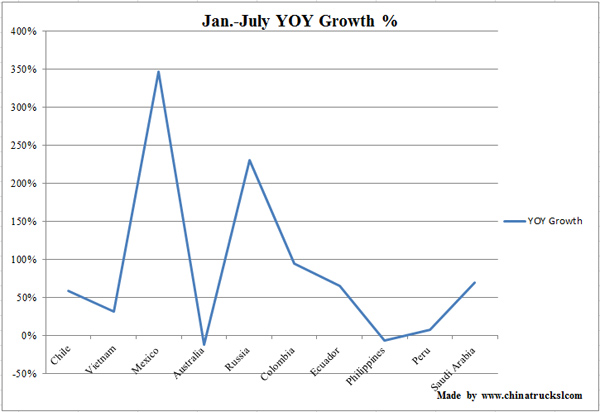 Mexico has the third-largest number, with an export volume of 19634 units, representing a year-on-year increase of 347% and a market share of 7.24%.

Australia has the fourth-largest number, with an export volume of 12823 units, representing a market share of 4.76% and down 12% YOY.

Russia comes to the fifth place, to which 12437 China trucks were exported, with a market share of 4.62% and a 240% jump year-on-year, the second largest year-on-year export growth among TOP 10. 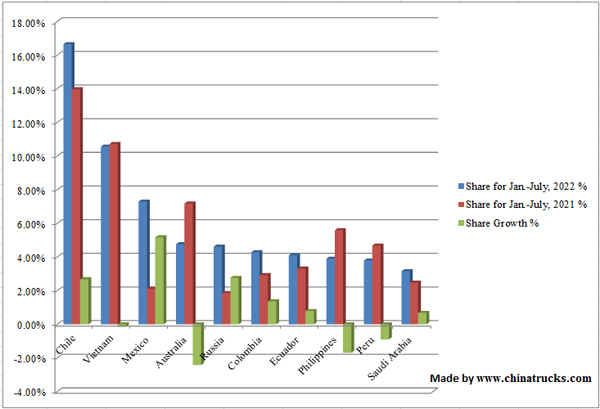 The seventh place went to Ecuador, to which 11039 China trucks were exported, with a 65% increase year-on-year and a market share of 4.1%.

The eighth to tenth places all account for less than 4% of exports.