Anhui Jianghuai Automobile Co., Ltd. (JAC, hereafter), originally called Hefei Jianghuai Automobile Factory came in to existence in 1964, was founded on September 30, 1999. Now the company employs more than 7000 people with total asset RMB 5.3 billion, covering an area of nearly 4.05 million square meters. The company listed on Shanghai Stock Exchange on Nov.29, 2001, its stock (code: SH600418) has been recognized as a blue chip. JAC is the high-new technology enterprise of Anhui province as well as one of key enterprises of the National Torchlight Plan. 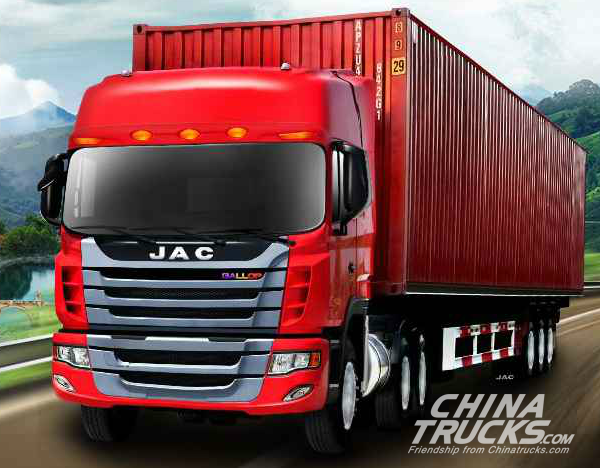 The main products of JAC include the manufacture of whole serial commercial vehicles, Refine MPV, 6~12 meters bus chassis, engine, gear-box, auto parts and components etc. Now it has an annual production capacity of more than 200,000 vehicles.

In 2005, the sale of all kinds of JAC auto was over 430,000, the sale income of auto achieved 9.5 billion with 21.96% profit rate. And since 1996, JAC has become rare auto company maintaining an appropriate rapid profit growth for 16 years. The main products of JAC have played very important role in their relevant market segments in China, for example, the bus chassis of JAC has been keeping top one for 12 years; the quality, customer loyalty and export volume of JAC light car is the best one in China auto industry for many years, furthermore, its market share has been the second one in like products by the end of 2004, JAC light car was awarded the Best Commercial Car in 2005 by China Association of Automobile Manufacturers absolutely due to its excellent C/P rate; the brand-new heavy car launched to the market in 2005 has got much eminent achievement; Refine MPV has won both sale and good brand two campaigns of domestic MPV in 2005, in addition, its manufacture base has become the national biggest MPV manufacture base.

In 2011, JAC has achieved more than 20 years quickly growth, and sold all kinds of vehicles approximately 470,000 units with growth of 5.4% year-on-year,among which the exports were about 70,000 units, up by 207%. In the first half year of 2012, JAC has sold all kinds of vehicles more than 226000 units and the export products have played a very important role in the relevant market segments. JAC has been the country's largest bus chassis producer for 18 consecutive years. As a light commercial vehicle leading manufacturer in China, JAC has been No. 1 in export sales of for 11 consecutive years.

JAC has relied on the concept of precision in production and advanced CRM to establish a complete purchasing, logistics, manufacturing, sales and after-sales service network and a quality management system. Since 1998, JAC has obtained a series of important certifications such as ISO9001 quality system, ISO43001 Environmental Management System, ISO10043 Training Management System, OHSAS18001 certification for health and safety.

While constantly maintaining and developing its commercial car market position, JAC has also consistently sought to develop passenger car market, and it will strive to be a leading national auto manufacturer with core international competition during the following five years.