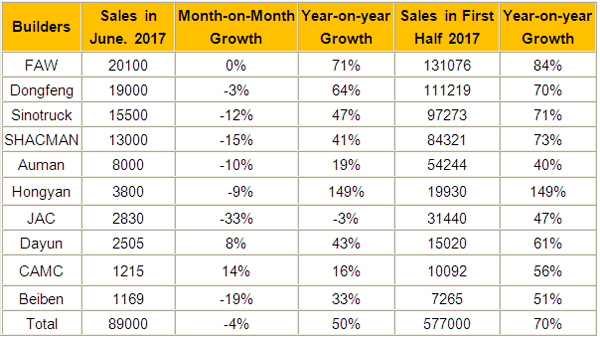 According to statistics, the sales volume of heavy trucks in the first half year is 577,000 units. If this trend can be maintained, the sales volume is not hard to break through 900,000 units for the whole year. How the top 10 enterprises perform in such a good situation?

In June, Jiefang sells about 20,000 units, holding the No.1 position again, up by 71% year on year and roughly the same compared with last month.

In addition to Jiefang, Dongfeng sells 19,000 units, down by 3% over last month, but up by 64% year on year. The accumulative sales volume in the first 6 months is up by 70% year on year.

According to SHACMAN, in June, it sold over 13,000 units. In the first 6 months, the sales volume of civil use products surpasses 70,000 units, up by 120% year on year. The market share increases by 1.6 percentage points.

As for SINOTRUK, it has orders up to over 10,000 units reserved for next month. The market is in good momentum.

Compared to the relatively stable ranking in the first group, the second group has witnessed dramatic changes in ranking. Hongyan surpasses JAC, and Dayun and JAC has little gap in single month’s sales.

Also, Dayun has a good performance. In the first 6 months, it sells 15,000 units, up by 47% year on year and up by 8% over last month. It is the only enterprise in top 10 seeing positive growth compared with last month.

(Remarks: the data of June in above article is forecasted by enterprises, not the official data of CAAM.)