Lifan Ranks among the Top Medium Truck Sales in September

According to data released by the China Association of Automobile Manufacturers (CAAM), in September 2017, medium truck sales stood at 22,661 sets, up 12.55% from the same period last year. While the gross sales of the top ten reached 22,286 units, accounting for 98.35% of the total sales volume. Eight of the top ten grow while the rest two go down. T-KING OULING and Beiqi Foton boast the highest growth with an increase of 638.46% and 338.74% respectively. Dongfeng and FAW continue to decline this month with a fall of 42.98% and 43.40% respectively. 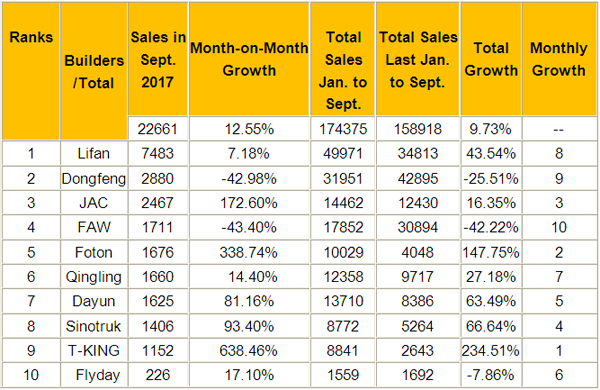 China medium truck sales stood at 174,375 sets during January to September with an actual total increase of 9.73%. Seven of the top ten grow while the rest three decline. T-KING OULING and Beiqi Foton recorded the largest growth with a rise over 100% while FAW led by 42.22% decline.